Angiostrongylus vasorum(lungworm) is nematode parasite of the pulmonary arteries and right heart of dogs and wild carnivories. The geographic distribution of the parasite includes various countries of Europe, North and South America as well as Africa. The parasite appears to be quite common in well-isolate endemic foci as the South East of England. One of the hot-spots is Surrey, South West of London. Prophylaxis of the parasite in this regions is achieved using various combinations of antiparasitic tablets and/or spot-on products.

In the literature ocular manifestation of the lungworm invasion include inflamation of the posterior segment (uveitis) with or without retinal detachment and/or retinal hemorrhages. Usually the clinical manifestations is bilateral. As a consequence the vision is impaired. G.Payne also reports anterior uveitis with parasite larvae in the anterior chamber.

Female 6 month old Boxer presented to the clinic with three days history of sudden blindness. The owner is the breeder of the dog. The mother of the dog has never been tested for hereditary eye diseases. Last treatment for fleas and worms was 4 month ago with Frontline spot on (Merial) and Drontal plus tablets (Bayer). The dog was in an excellent general condition at the time of the consultation.

The dog was examined using a Protable Slit Lamp (HSL-P1), Tonopen (Medronic Solan) and Tonovet (ICare), Direct Ophtalmoscope (Heine omega 200), in dim light enviorment. The dog was bumping into objects and the right eye(OD) was mildy buphthalmic. Pupillary light reflex, Dazzel and Menace reflexeswere missing completely. OD had severe scleral congestion and corneal edema. The intreocular pressure (IOP) was 29 mm/Hg OD and 23mm/Hg OS respectively. Flare was +1and the vitreous was visible in the anterior chamber. The posterior segment was difficult to evaluate. By retro-illuminationwas found ventral posterior subluxation of the lens and normal size, non-reactive pupil(fig.1). The left eye (OS) was free of corneal oedema and easier to evalute (fig.2). The iris was midriatic with normal color. Was observed dorsal posterior lens subluxation and a large amount of vitreous in the anterior chamber. The retina had a slightly blurry appearance. The optic nerve head ( ONH) was in intensive pink color,blurry and oedematous. Was not find evidencefor cupping of the ONH. Gonioscopy was performed of the OS. The iridocorneal anglewas occluded with prolapsed vitreous.

Due to the mix clinical signs,fast and definitive diagnose was a challenge. The glaucoma was definitely a consequence of severe vireous herniationinto the anterior chamber. The dog owner reported frequent wild games with severe shaking of the head. The dynamic force created in the inner eyes fluids combined with weakness of the ciliaryzonular fibres could explain the sudden belateral lens and vitreous dislocations. The investigations were focused on finding possible systemic diseases that would correspond with ocular clinical signs. The hematology profile showed mild regenerative anaemia and the biochemistry was unremarkable. The PCR tests for Ehrlichiosis, Anaplasmosis, Hepatozoon canis and Babesia were negative. Most of the diseases are not edemic in the South East of England and normaly appear as imported disease. The geographic position and the age of the dog combined with the inappropriate prophylactic program lead logically to serology testing for Angiostrongylus vasorum (fig 3) . The number of the larvae on the slides was significantly high.

The initial treatment plan includes an ugrent reduction of the high ocular pressure (IOP). Cosopt (Dorzolamide 20mg/mland Timol 5mg/ml) was chosen for the purpose. In this case Prostaglandine analogues, like Latanoprost, were avoided because of the possible pupillary block from the herniated vitreous. Prostaglandines also could deteriorate the uveitis. Oral Prednisolone tablets 1mg/kg, and Febendazole 1mg /kg were include in the treatment. On the follow ups, 2nd, 7th and 14th day after the initial diagnosethe IOP remained low and stable. The clinical sighs of uveitis disappeared. One week after the initial consultaion retinal hyper-reflectivity was observed. EGR and vitrectomy were not performeddue to the financial constrains of the owner. Unfortunately the vision did nor recover. It is questionable whether the blindness was caused from the higher IOP or from the inflamation of the optic nerve.

Posterior uveitis is well described in the literature as a clinical sign of lungworm infection. Secondary glaucoma is not described as a complication of the disease. The predisposing factors in this case are lack of appropriate parasite prophylaxis, the silent systemic clinical picture and the frequent games involving head shaking. Angyostrongilus vasorum infection could be included in the differential diagnosis pattern for secondary glaucoma. 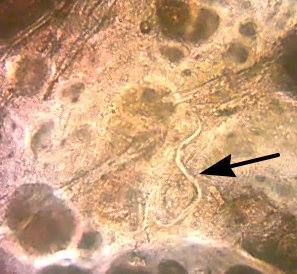 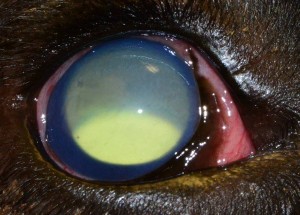 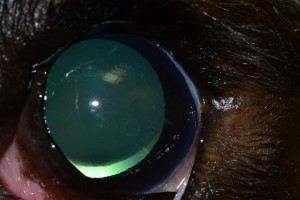