Neurofibrosarcomas are malignant nerve sheath tumors that are type of soft tissue sarcomas. They are usually discovered in the peripheral nerves ( most commonly the nerves that are forming the brachial and lumbosacral plexus ). Sometimes they could be discovered in the cranial nerves ( trigeminal, vestibulocochlear ). These tumors are arising from perineural fibroblasts or Schwann cells. They are slow growing and usually locally invasive but are unlikely to metastasize.

5 -years old female dog , Miniature Poodle , was presented for clinical examination. The dog had a long lasting history of difficult movements of the hind limbs. The problem started about 2 months ago, at the beginning only with one limb lameness. The dog had work-up done this problem , including CBC , biochemistry analysis, UA , X-ray, ultrasound of the abdomen and CT of the spine, but not clear visible reason for its condition was discovered. The dog was treated with several drugs, including NSAID , antibiotics, Steroids and Nivalin ( Galantamine hydrobromide ) , but without any successful results.

The dog in general condition , with normal temperature and mild discomfort on  palpation on the abdomen. On the neurological examination : alert mental status, normal cranial reflexes, paraplegic patient, with increase patellar reflexes, and present withdrawal reflexes. There was a mild spinal pain over the spine, localized at the thoracic part of the spine around Th7- Th10 vertebra. The urinary bladder was distended and very hard to express. 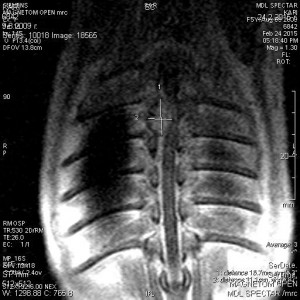 The problem was localized Th3-L3 area of the spinal cord ( Th3-L3 myelopathy ). The most probable diagnosis that could explain the patient’s condition are :          intervertebral disk disease and spinal neoplasia .

Treatment with Prazocin and Bethaneochol was started in order to improve bladder expression and MRI examination was scheduled. With MRI examination was found an ovoid , intradural, extra medullary mass with size 19/11.2 mm that is severely compressing the spinal cord at the level of Th7-Th8. The mass is slightly hyperintensive on T1 and is located on the right side of the spinal cord ( Pic. 1 ) .

After MRI examination the dog lost its deep perception and on the next day was scheduled for surgery. Before the surgery CSF was collected for analysis but the content of the protein and the cell count were normal. The dog had a dorsal laminectomy on the level of the arch of Th7-Th8 vertebra. After opening the spinal canal , a firm, white mass around 15 mm was discovered. ( Pic.2 – black arrows ). After being fully removed  , the mass was send for a histopathological examination. 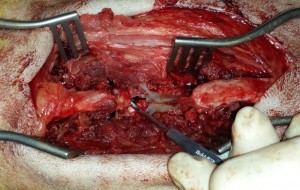 In the post surgical period the dog had painkillers – Morphine/Ketamine/Lidocaine mixture for 5 days and intravenously administrates antibiotics. On the next day the dog regained its deep perception. On the day of its discharge from the hospital it had little movements of its hind limbs and no problem with urination. The owner was adviced about some rehabilitation techniques that he could do at home with the dog and treatment with antibiotics and NSAID was extended for another week. Two weeks later the patient was much better with slight ataxia and a week later – completely normal.

The histopathological result was Neurofibrosarcoma – malignant mesenchymal neoplasia . This type of tumor could reoccur even after a full surgical removal because of the formation of microsatellites.

The localization of this neoplasia is interesting. Usually this tumor grows at the level of brachial or lumbosacral plexuses and it is very uncommon to be found within the spinal canal.

Additional treatment was discussed with the owner. Usually in such cases radiotherapy could be beneficial ( but not available in Bulgaria ) . Additional metronomic chemotherapy with doxorubicin , cyclophosphamide and vincristine , very often in combination with NSAID , could be possible option.

In this case i suggested a combination with NSAID , Meloxicam at dose 0.1mg/kg , Cyclophosphamide 10-15 mg/m^2 q 24hours per os , but the owner declined the second drug, so the dog stay only on meloxicam only.

Unfortunately , two months later the dog came with clinical signs with the same neurolocalization. A new MRI examination and surgery afterwards were suggested to the owner but he declined. He ordered a wheelchair for the dog , to improve her mobility for a short period.

The prognosis of neurofibrosarcoma is guarded. The recurrence of the neoplastic lesion could be expected despite full surgical removal. The usual localization of this neoplasm is within peripheral nerves but sometimes it could be localized inside the spinal canal and look like an intradural extramedullary lesion. The best treatment option is surgical removal and radiotherapy afterwards.