Male cat ( 4.5 kg ) with chronic gingivitis-stomatitis-pharyngitis syndrome was admitted to our clinic because of aspiration of loose tooth 15 days ago. At that time, the owner told us that cat first started to cough suddenly and because of coughing he received antibiotics. After a course of antibiotics, cough started to decrease, but didn’t stop completely. Thorax x-rays done on next physical examination revealed tooth inside the lungs. 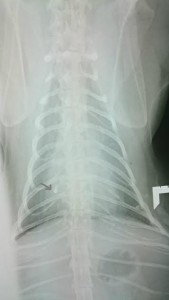 At the time of admission cat was stable with no apparent breathing problems. The cat was afebrile and blood work revealed elevation in leukocyte number. On x-rays we could see that the tooth (premolar) was stuck somewhere in the right caudal lung lobe (Picture 1). The x-ray scan also demonstrates a radio opaque area around the tooth, which represents fluid filled dilated bronchi ( Picture 2). 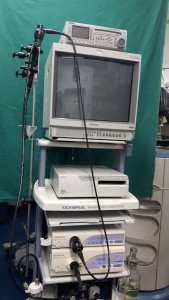 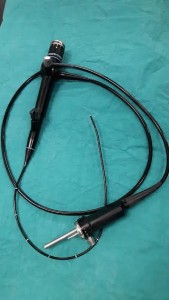 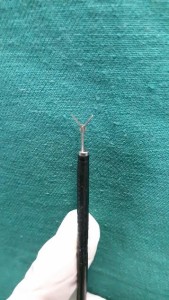 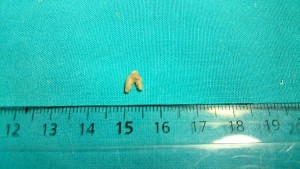 After initial examination, we decided to do a bronchoscopy to attempt endoscopic tooth removal. After intubation Olympus fiberoptic paediatric bronchoscope (3.6 mm diameter) with 1.2 mm working channel was introduced into the trachea (Picture 3 and 4). In level of segmental bronchi of right caudal ( posterior ) lung lobe we located bronchus plugged with white thick purulent material. In order to liquify this purulent material for aspiration we first lavaged it with warm saline. After successful aspiration of pus tooth was finally revealed. Grasping of the tooth was done with 0.9 mm diameter alligator forceps (Picture 5 and 6). After removal of the tooth rest of the pus was aspirated.

Majority lung foreign bodies in cats will be trapped somewhere along the right bronchial three because of anatomical differences of right and left lungs.