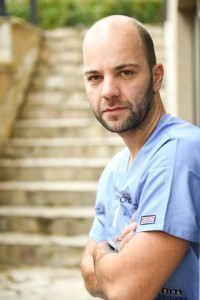 Rib tumors are uncommon in small animals. Osteosarcoma (OSA) is the most common (73%). Other types include chondrosarcoma (CSA), fibrosarcoma (FSA), hemangiosarcoma (HSA).

Rib tumors tend to occur in large breed dogs and the usual location is in the costo-chondral junction. Radiographic changes include lysis, sclerosis, or a mixture of lytic and blastic patterns. Intra-thoracic invasion of adjacent pericardium and lung lobes is relatively common, so CT scans are recommended to determine the location and extent of the tumor, planning of the surgical resection, and clinical staging for pulmonary metastasis1.

Chest wall resection is recommended treatment for the rib tumors 2. The surgical approach is the identical to intercostal thoracotomy, but caudal and cranial margins include a minimum of one intercostal space and rib, while ventral and dorsal margins should be a minimum of 2 cm from the tumor.  Because of the large defect present, a need for autogenous and/or prosthetic reconstruction techniques is often necessary. Autogenous reconstruction techniques include the latissimus dorsi and external abdominal oblique muscles, and diaphragmatic advancement following resection of caudal rib tumors 3. Prosthetic reconstruction with non-absorbable polypropylene mesh, alone or in combination with autogenous techniques, is recommended for large defects. Autogenous reconstruction is preferred in humans because of a high complication rate associated with prosthetic mesh, such as infection and herniation. These complications are rarely reported in dogs following chest wall reconstruction with prosthetic mesh. Up to six ribs can be resected without affecting respiratory function in dogs 4.

Thoracic surgery in small animals is considered a painful procedure, resulting in alterations in pulmonary function and respiratory mechanics. Appropriate analgesic protocol may improve outcomes. Systemic administration of opioids and NSAIDs, intercostal and intrapleural blocks, and epidural analgesia are among the most common options for pain management after thoracic surgery in small animals 5.

A 10 years old male pitbull dog, weighting 24 kg was presented to us. The owners had been to three veterinary consultations before, the chief complaint being lameness at the right front limb. The cause was suggested to be a “lump” on the right thoracic wall. Based on an X- rays study and clinical examination, so far the owners were discouraged to pursue the further surgical treatment, because the procedure was supposed to be too aggressive and painful. The dog was prescribed palliative NSAIDs therapy. 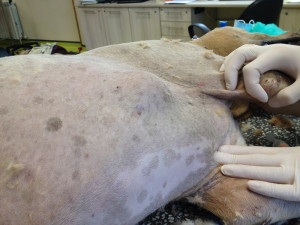 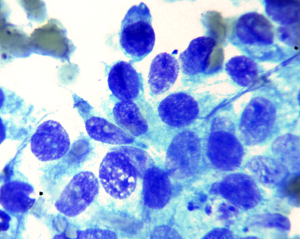 A fine needle aspiration was done and evaluated (Fig.3).

“Clusters of  fusiform mesenchymal cells, with obvious signs of malignancy- pleomorphism, increased anisokaryosis and anisocytsosis, basophilia, multinucleated cells . Occasional osteoclasts, macrophages and neutrophils were noted. No osteoid/chondroid was found in the examined material. The tumor was classified as malignant mesenchymal– fibrosarcoma, chondrosarcoma or osteosarcoma.” 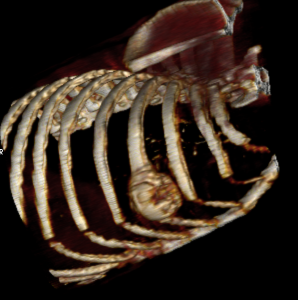 A computer tomographic study was accomplished and the mass’s margins investigated carefully. A mineralised tumor centre (from the distal third of the 4-th rib) was found; also soft tissue aggressive expansion in the neighbour intercostal spaces -3-th and 5-th. Typically for the chest wall masses, there was an eccentric growth- the 2/3 of the mass volume protruding into the throracic cavity, extruding the pulmonary parenchyma and contacting the heart on the right side. No lung metastases were noticed on the scans (Fig.4, video 1).

After a discussion with the owner, a decision for surgical resection was made.

Premedication with Medetomidine and Butorphanol was used, followed by Propofol induction. The maintenance was sustained by Isoflurane and Ketamin drop in the fluid sack. 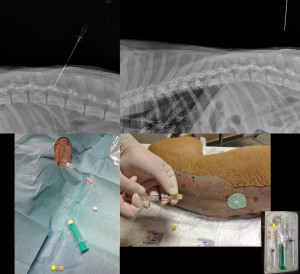 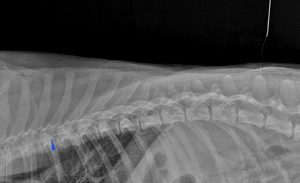 The thoracic wall resection is considered very painful procedure, so a corresponding analgesic strategy was built and applied. A continuous post operative segmental epidural analgesia application was provided. T13—L1 epidural puncture (by Tuohy needle), was done and an epidural set catheter (B. Braun) was inserted till the 5-th thoracic vertebra(Fig.5-6). The catheter was safely attached and maintained for 48 h post op, during the patient’s stay in the clinic. The agent delivered through, was Levobupivacain (0,5 %), one 1ml every 4 hours, including pre op.

After the mass removal, a soaker catheter was sutured at the ribs resection edges; another one was applied between the skin and muscle flap, covering the defect. Both catheters were connected to an elastomeric pump (B. Braun), delivering locally 5 ml/h of 1% Lidocain for 96h (including outpatient period) post operatively.

The rationale behind additional soaker catheters was to suppress maximally the nociception transfer, including the sensation through the non- blocked cervical spinal nerves. Also we contemplated- removal of epidural catheter at the time of discharge, but leaving the delivery pump, providing residual local analgesia.

Cimicoxib (Cimalgex) was prescribed for 10 days post op. No opioids were used in the recovery period. 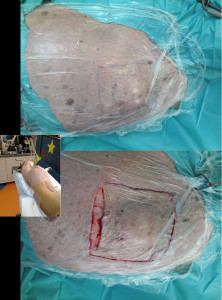 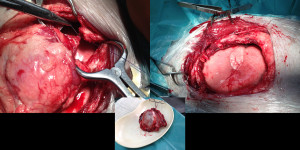 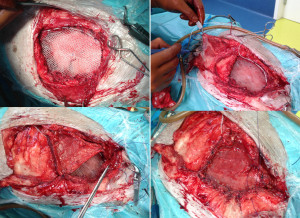 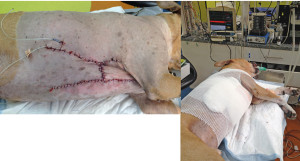 After macroscopic mapping and drawing, a rectangular shaped, full thickness (skin, muscle, ribs and pleura) en bloc excision was done (Fig.7).  This included partial ostectomy of 3-th, 4-th and 5-th ribs. Caudal intercostal thoracotomy was performed first, permitting evaluation of the intrathoracic extent of the tumor. Special attention was applied at the proximal approach to ligate safely the three intercostal arteries and veins. No visceral lung pleural or pericardium adhesion were noticed. Careful electrocautery haemostasis was done at the muscles’ cut edges.  The removed mass was macroscopically evaluated for “clean” margins, and a reconstruction of the large defect was preceded (Fig.8). A double (folded) polypropylene mesh (SURGIPRO®TYCO) was sutured to the wound edges, using simple interrupted pattern (3-0 PDS material). A latissimus dorsi muscle flap was advanced to cover and “seal” the defect (Fig.9). The air content was evacuated with aspirator on the final closure; no chest drain was left in the thorax. Two soaker catheters were applied in the wound; the skin was closed by double pedicle advanced flap technique and simple interrupted pattern (Fig.10). 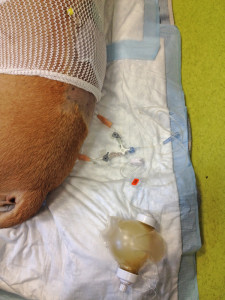 The dog’s chest was loosely bandaged; the elastomeric pump and epidural catheter were securely fixed to the body(Fig.11). I.v. antibiotics and fluid support was continued for 24 hours post op.

Provided very effective local analgesia- the dog revealed excellent comfort immediately after the surgery (video 2,3,4). We paid special attention to any pain signs- excessive vocalization, hyper-excitement, panting, tachycardia, behavior abnormalities, etc. No such were present and the patient started eating the next day after surgery; it was discharged 48 after the procedure. No ambulation deficits were seen with the Levobupivacain application. The elastomeric pump was removed on the 4-th day. Mild to moderate serosanguineous discharges from the wound were present for 10 days after the surgery.

On the 14 days recheck the wound was healed and the sutures were removed; the patient showed excellent clinical recovery (Fig.12).

The surgical excision is considered the first treatment of choice for malignant rib tumors, but a question about the long term prognosis and rationale behind an aggressive surgery could be raised. As mentioned above, the most common rib tumors are osteosarcomas (OS)  and chondrosarcomas(CS). They have quite different prognosis- OS is rarely cured, whereas CS could be cured with surgery alone. Dogs with osteosarcoma that have elevation of the Alkaline phosphatase level have a much lower median survival times 6. Chemotherapy significantly increases the survival of dogs with rib OS- from a few months to about 9.5 months. Roughly survival time is increased 4 times with chemotherapy + radical resection, compared to surgery alone. Chondrosarcomas have a very good chance to be cured with surgery alone with median survival times exceeding 3 years. The other common type -fibrosarcoma and hemangiosarcoma have intermediate metastatic potential between the other two. Survival times ranging from 120-450 days with chest wall resection alone 7.

Dealing with motivated owners, a patient in good general health, with normal AP, and need for moderately large rib case resection size, we found good indications for tumor removal without preliminary histological verification. We suggested acceptable life expectancy in the worst tumor type scenario (the option for chemotherapy was available). While respecting previous vets’ opinions, we took into consideration the stated in the literature fact that dogs tolerate removal of a large portion of the rib cage very well.

Despite all this encouraging decision making facts, we would have fought ethical issues in a scenario we weren’t able to provide sufficient peri-operative analgesia of the patient. Except the ethical side, the pain associated with thoracoectomies may have potentially lethal consequence for the patient cardiopulmonary status after surgery. A thoracoectomy requires a very painful excision, involving multiple muscle layers, rib resection, and continuous motion as the patient breathes. Sub-optimal management of pain has major respiratory consequences. Inspiration is limited by pain, which leads to reflex contraction of expiratory muscles, and consecutively to diaphragmatic dysfunction (decreased functional residual capacity and atelectasis, hypoxemia).Treatment of acute post-thoracotomy pain is particularly important not only to keep the patient comfortable but also to minimize pulmonary complications 8.

In the veterinary literature there are suggestion for various types of analgesia provided after thoracotomies-  intercostal blocks, intrapleural lidocaine, incisional pain soaker catheters9; systemic agents as NSAIDs, opioids, NMDA antagonists (ketamine),etc. There is plenty of space for objective evidence based studies, proving the best analgesic protocol, yet.

In the presented case we applied sophisticated but uncommon noxious stimulus blockage strategy. The thoracic epidural catheter insertion is technically demanding procedure but it is very powerful tool for both intra and post operative pain control 10. Even more, it allows even preemptive pain blockage. So-called preemptive analgesia is intended to prevent the establishment of central sensitization caused by surgery induced injuries. Evidence from basic research has indicated that analgesic drugs are more effective if administered before, rather than after, a noxious stimulus.  Human studies report that the area of post-thoracotomy pain is more discrete and largely restricted to the site of surgery. Hence, any benefit of preemptive epidural analgesia is, theoretically, more apparent in thoracic surgery than in abdominal surgery.

It is interesting if the present tumor or the arthritic elbow lesions caused the primary clinical sign- front right leg lameness. Lameness of the forelimb had been described with costal tumors, located within the first four ribs 11. Possible mechanism is pain translation to the nerves to the limb, mechanical interference with movement or invasion into the muscles of the forelimb. After the surgical excision the owners reported lameness disappearance, supporting the tumor as the real cause.

Excision of malignant chest wall masses could be very successful. It is feasible to achieve clean cut margins; large residual wall defects could be managed with combined reconstruction techniques. Never mind the aggressive character of the procedure, an excellent patient comfort should be achieved with a combination of thoracic epidural and local wound nerve nociception blockage, as in this case.

Just before the submission of this case report the histopathology result was received. It concluded:

Mass, originating from spindeloid to pleomorphic cells, highly cellular. The cells were round, organized in bundles and solid formations. There was moderate to marked anisokaryosis and anisocytsosis; mitotic figures frequently present, multifocally there is osetoid production.

In the case, no local recurrence is expected because of the wide margins excision. Generally the median survival time (MST) for dogs with rib OSA is 90-120 days with surgery alone and 240-290 days with surgery and adjunctive chemotherapy, and death is caused by distant metastases.  Age, weight, sex, number of ribs resected, tumor volume, and total medication dose do not influence survival disease-free interval 12.

A chemotherapy protocol is already being contemplated:

If available, the long term result and the survival time of the patient will be followed and shared through the journal.