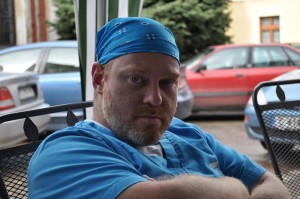 Came in the clinic on 11.04.2017 with left circle movements, menace deficit on the left and no reaction when stimulating the nasal mucosa.  On the right, spinal reflexes are decreased and there are no conscious proprioception.

I – inflamatory – it’s possible but no changes in blood sample

T – toxic – The dog did not take any medication, fed the same food and was not seen taking unusual things, but it’s not unpossible

M – metabolic – there is no other clinical signs or any changes in blood samples.

I – idiopathic – there is no seizures and vestibular signs

D- degenerative – the dog is too young for cognitive dysfunction and too old for other degenerative diseases.

We made MRI on 12.04. and found a lesion in the left mesencephalon. 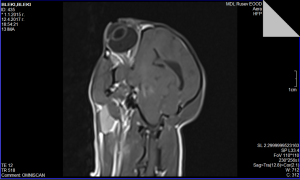 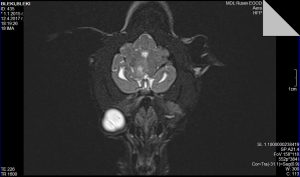 The final diagnosis is neoplasia in left midbrain.

We started to prepare for surgery.

The surgery was on 22.04.2017 and we made a left craniotomy and displacement of the temporal lobe dorsolaterally until the lesion was reached. 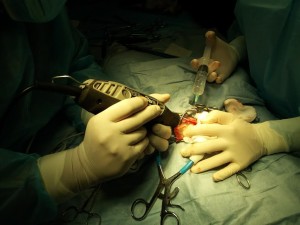 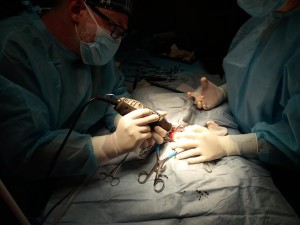 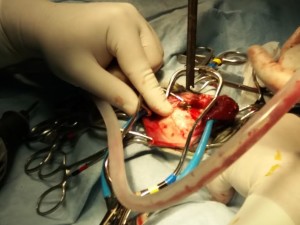 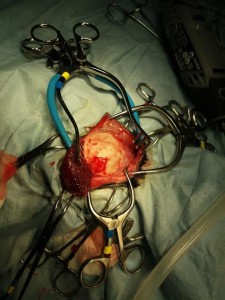 We aspirated the brain liquor and very slowly reverse the left temporal lobe.( Pic 3 and 4)

When we found the lesion we punctured the cyst formation and drew the liquid contents.( pic 5)

The reason to do this surgery was to try to reduce the pressure in the tissue and to improve the dog’s condition.

Until the methylprednisolone is reduced, the patient is better every day, improves motor activity, appetite, but fails to maintain a constant temperature. A corneal ulcer of the left eye appears – I guess the cause is a trauma to the left oculomotor nerve and reduced lacrimation.

On 28.04. we included one more antibiotic – amoxicillin with clavulonic acid.

On 29.04. the prednisolone was reduced to 0,5 mg/kg, the dog was with anisocoria (myosis on the right eye and mydriasis on the left). On 30.04. the circle movements on left started again.

The dog is good, he walk normally but when he stops, he start to make circle movement on the left.