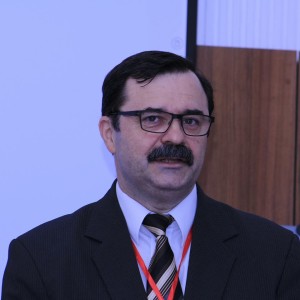 Cardiac dilatation is a common finding in dogs with heart disease. Chronic myocardial stress and volume overload are the main reasons for cardiac remodeling. These changes are encountered in most of chronic diseases such as dilated cardiomyopathy, mitral valve disease or congenital disease that develop volume overload. Cardiac dilatation should not be confused with dilated cardiomyopathy (DCM), which is known to be a myocardial disease induced by several specific factors such as genetic or familial predispositions. In the absence of specific signs, such as mitral valve degeneration or congenital heart diseases, cardiac dilatation should be carefully evaluated and additional tests must be performed before deciding the diagnosis and therapy. In veterinary medicine, there is insufficient data regarding the differential diagnosis of cardiac dilatation when specific sins are absent.

The aim of this paper is to report and discuss a patient with congestive heart failure due to severe cardiac dilatation associated with multiple arrhythmias and to describe the diagnostic protocol, therapy and evolution of the disease.

An eleven years male, German Shorthaired Pointer dog, weighing 38 kg, was referred for a second opinion to our Cardiology Service from the Teaching Hospital of the Veterinary Faculty of Iași, because of chronic abdominal fluid accumulation, severe effort intolerance and weight loss for the past few months. The dog was receiving cardiac therapy assigned by the referring clinician and consisted of pimobendane (Vetmedin® Boehringer Ingelheim), 0.25 mg/kg P.O. BID and furosemide (Furosoral, Artesan Pharma GmbH & Co.), 2 mg/kg P.O. BID. The owner reported that the dog had been treated for Babesia canis for four times in the past few years. 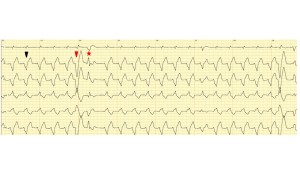 Fig 1. Six leads ECG at 50 mm/sec and 5 mm/mV of an eleven years old dog with signs of congestive heart failure. The main rhythm is represented by an accelerated idioventricular rhythm (black arrowhead), with a heart rate of 168 bpm, interrupted by left ventricular premature complexes (red arrowhead) and fusion beats (star)

Fig 2. Six leads ECG at 50 mm/sec and 5 mm/mV of the same dog with signs of congestive heart failure. Sequences of supraventricular rhythm are visible, with a heart rate of 240 bpm and sparse sinus complexes (star); also, one left ventricular premature complex is present on the tracing (diamond) and junctional beats with retro-conducted P’-waves (arrow);

Fig 3. Six leads ECG at 50 mm/sec and 5 mm/mV of the same dog with signs of congestive heart failure. An atrial beat is present with a small P-wave (star), followed by 3 RBBB aspect complexes and a fusion beat. The black horizontal arrow marks the beginning and the end of fast supraventricular tachycardia consistent with atrial fibrillation, followed by another fusion beat (diamond);

There were also present runs o junctional beats with a retro-conducted P-wave. Between these sequences of arrhythmias, there were present 25 left ventricular premature complexes, with the same morphology, with a negative polarity in DII, DIII, and aVF and positive polarity aVR and aVL. These complexes had a length of 120 msec and a tall, opposed T-wave. Multiple fusion beats were also present (Fig no 2 and 3). 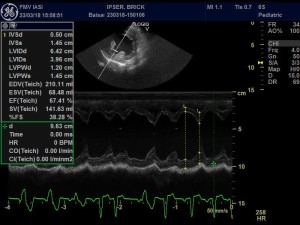 Fig nr. 6 Echocardiographic M-mode in right parasternal short axis view through the papillary muscles of the left ventricle of the same dog with signs of congestive heart failure. Arrhythmic contractions of the left ventricle are visible. The free wall and septum appear thinned and the ventricular cavity is enlarged in both systole and diastole. The measurements were performed when the rhythm was supraventricular. The shortening (SF%) and ejection (EF%) fractions are within normal limits. 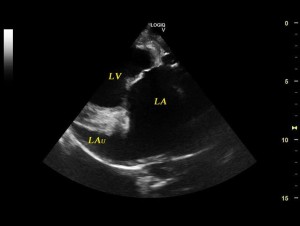 Cardiac ultrasonography revealed severe left ventricular dilatation during systole (39.6 mm 95%CI 15.8-17.18 mm) and diastole (64.2 mm, 95% CI 37.64-39.1 mm), with thinned interventricular septum and ventricular free wall and severe left atrial dilatation, with a LA/Ao ratio of 2.54 (normal upper limit 1.6). Also, the left auricular cavity was visibly enlarged. The mitral valve was thin with normal echoic appearance and abnormal motion due to the hemodynamic changes induced by the underlying arrhythmia and a regurgitating jet was observed by color doppler. The left ventricle systolic function was within normal limit, when assessed during supraventricular rhythm (SF%=38, EF%=67). The pulmonary and aortic flow were laminar, within normal ranges. There were no signs of pulmonary hypertension. The pericardium was normal, without fluid accumulation (Fig no 4-6).

Fig nr. 7 Left lateral chest radiography of an eleven years old dog with signs of congestive heart failure. The cardiac silhouette is visibly enlarged with dorsal displacement of the trachea and a perihilar pulmonary interstitial and alveolar pattern is visible extending in the caudal lung lobes. A round radiopaque mass is visible on the lower cranial abdomen

A left lateral thoracic X-ray was available for examination and revealed severe cardiomegaly, with a VHS of 13.3v. The trachea was dorsally displaced and a perihilar pulmonary interstitial and alveolar pattern was visible in the caudal lung lobes consistent with moderate cardiogenic pulmonary edema. A round radiopaque area was present over the gallbladder topography and a gallbladder stone was suspected (Fig no 7).

The diagnosis consisted of idiopathic dilated cardiomyopathy with supraventricular and ventricular arrhythmias. The current therapy was maintained and amiodarone (Amiodaronă LPH, LABORMED PHARMA S.A.), was added as following: 15 mg/kg P.O. BID for 7 days, followed by 7.5 mg/kg P.O. BID for the next seven days and 7.5 mg/kg P.O. QD for the next fourteen days. The dog was released from the hospital the same day with effort and salt restriction. The reevaluation was scheduled after 2 weeks if no event required a sooner visit.

Three weeks later, the owner called for a reevaluation. The medication was administered according to recommendation and no events were observed during this period. aA significant improvement in the quality of life of the patient was reported.

The dog was alert and active during physical examination, with pink mucosal membranes, CRT of 3 seconds, moderate decreased respiratory rate (36 bpm) and effort, and a less distended abdomen. Palpation of the thorax revealed a strong cardiac beat and the arterial pulse was synchronous with the cardiac beat. Cardiac auscultation showed rhythmic rhythm, with a heart rate of 114 bpm and III/VI systolic plateau left apical murmur.

Fig 8. Six leads ECG at 50 mm/sec and 5 mm/mV of the same dog with signs of congestive heart failure, performed during reevaluation, 3 weeks later. The predominance of sinus rhythm is visible, with a heart rate of 115 bpm, interrupted by one right ventricular premature complex (star) and one supraventricular complex (arrowhead);

The five minutes six lead ECG tracing revealed a predominant sinus rhythm, interrupted by 107 single supraventricular complexes and only one right ventricular premature complex with positive polarity in DII, DIII and aVF and negative in DI, aVR and aVL. No sequences of supraventricular tachycardia or accelerated idioventricular rhythm were present on the five minutes tracing. The abnormalities in morphology of the sinus beats revealed a mitral P-wave (78 msec), increased amplitude of the R-wave (3.34 mV) and increased length of the QRS complex (91 msec) (Fig no 8).

There were no improvements seen during the echocardiographic examination. The owners were instructed to administer the therapy with pimobendane and furosemide continuously and amiodarone until the end of protocol. Eight weeks after the first examination, owners reported by telephone that the patient is alive and the quality of life remained improved.

Dilated cardiomyopathy (DCM) can occur as a primary cardiomyopathy such as genetic, or familial DCM [5], or secondary to myocardial stress, such as drug- or toxin-induced, infiltrative, ischaemic, metabolic, nutritional, or inflammatory myocardial diseases [6]. In both cases, DCM is expressed through a disease of the myocardium associated with ventricular systolic and diastolic dysfunction and development of congestive heart failure [5]. According to ESVC Taskforce for Dilated Cardiomyopathy, 2003, scoring system, the score in this dog was above 6 points, which is consistent with the presence of DCM  [5]. The left ventricular internal diameter in both systole and diastole were above the 95% CI based on the regression formula [7], the sphericity index was under the lowest recommended limit and left atrial enlargement was present. However, there were some changes that did not seem to be associated with primary DCM. The shortening and ejection fraction were within normal ranges and the large range of arrhythmias was not consistent with specific morphologic and rhythm changes in primary DCM. It has been suggested that atrial fibrillation is the most common arrhythmia in dogs with DCM and also, increased number of ventricular premature complexes may have diagnostic value [5, 8]. Nevertheless, it must be considered that the dog was treated with positive inotropic medication which may have influenced the systolic function of the heart. Another unexpected result was the intense positive response to arrhythmic therapy. Amiodarone is an antiarrhythmic agent with primarily class 3 action, but also potent class one. This agent prolongs the action potential duration and the effective refractory period in all cardiac tissues. It is recommended in dogs with ventricular arrhythmias and has also been used to convert atrial fibrillation to sinus rhythm [9].

The differential diagnosis for cardiac dilatation should include secondary DCM due to cardio-toxicosis, drug-induced, metabolic or nutritional factors, chronic myocarditis or tachycardia-induced cardiomyopathy (TIC). Secondary DCM is difficult to diagnose due to the multiple factors of environment and microclimate. A large series of pathogens have been reported to induce chronic myocarditis, including canine babesiosis [10-15]. However, in most studies, the etiological diagnosis was reached through histopathological examination of the cardiac tissue after patient’s death [16]. Considering the four episodes of clinical manifestation of canine babesiosis in this patient, cardiac enlargement may be related to this. Tachycardia-induced cardiomyopathy is characterized by cardiac dilatation and systolic and diastolic dysfunction due to long-term increased heart rate, however these changes may be easily confused with DCM. Clinical studies in human medicine have suggested that the left ventricle internal diameter and volume are significantly smaller in patients with TIC than in those with DCM [17]. Another difference between the two pathologies is that the ventricle remodeling during TIC may benefit from partial or total reversibility once the arrhythmia control is achieved [18]. In the patient discussed in this paper, we observed a significant improvement in controlling the rhythm and heart rate after the antiarrhythmic therapy but not in the cardiac remodeling. It remains unclear whether the arrhythmias were induced by the myocardial structural changes during the progression of heart remodeling or if the dilatation was induced by a chronic supraventricular tachyarrhythmia which later developed ventricular complexes and accelerated idioventricular rhythm.

Dilated cardiomyopathy is a common cardiac disease in large breed dogs, however differential diagnosis must be considered when cardiac dilatation is present, in the absence of any certain factors. The dog from this report had cardiac dilatation associated with severe arrhythmia. Although an etiologic diagnosis could not be established, we succeeded to improve the quality of life by controlling the heart rate and the rhythm.