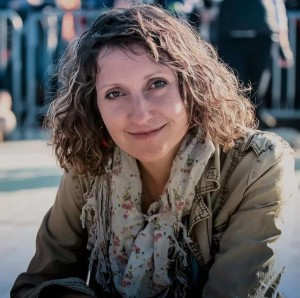 A 5 year old male, entire, pet ferret (Mustela putorius furo), weight 0,9 Kg was presented with labored abdominal breathing. The owner reported reduced appetite, difficulty breathing and restlessness. The ferret was not able to sleep or lie down for more than few minutes.  The ferret was used to live mainly indoor and allowed during the summer to be outside in the garden, for just few hours during the day, to be exposed to natural sunlight.

On presentation ferret was lethargic with abdominal breathing and breathing rate up to 90/minute. There was clear subcutaneous edema more prominent on the front and hind legs and ventral part of the abdomen. Mucous membranes were pale, while CRT was not possible to be assessed. Heart rate ranged in between 120-180 bpm. Pulses were weak even if assessing on the femoral artery was difficult due to the subcutaneous edema. Abdominal palpation was unremarkable, lymph nodes were normal in size. Thoracic radiograph showed loss of detail into thoracic cavity consistent with pleural effusion. Thoracic US was performed confirming pleural effusion and one hundred and twenty ml of modified transudate was drained. Brief screening echocardiography showed normal left atrium and left ventricle and severely dilated right atrium containing double line hyperechoic objects suggesting the presence of few adult Heartworms. (Fig 1). Right atrium was larger than left atrium. Doppler study and any further detailed investigation of the heart were not possible to be performed due the fact ferret became aggressive and owner declined any sedation or anesthesia. Snap® HTWM Antigen test (Idexx) on blood yielded negative result and at fresh blood smear examination no microfilariae were possible to be identified.  Knott test was not possible to be performed due to limited amount of sampled blood.

On the basis of echocardiography findings diagnosis of HW disease was done.  Negative HW antigen test was assumed to be due probably due to juvenile D.immitis worms and right atrium localization to the small size of pulmonary arteries as described in cats and ferrets.

The ferret was treated with Advocate® spot on >4kg (half tube), Furosemide 2mg/kg twice a day and Prednisolone 1mg/kg daily both of them orally. The ferret was stable on that therapy. He was eating and drinking well regain the normal body weight 1.5 kg. no breathing difficulties were reported. He was rechecked 35 days after initial presentation. Echocardiography showed right mildly dilated atrium but no presence of HW (Fig 2). Only 10 ml of fluid was drained from the thoracic cavity. From that time he was stable with no owners complain for 6 month. Suddenly he developed respiratory distress and on presentation was with cyanotic membrane. Pulmonary thromboembolism connects to HW disease was suspected Owner elected euthanasia and no more investigations. Necropsy was declined. 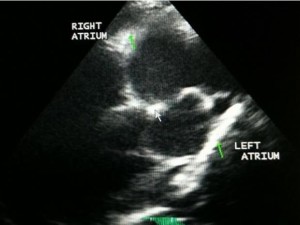 This case shows the in endemic area even indoor domestic ferrets may be infected by Dirofilaria immitis. and that the disease is difficult to be diagnosed and can lead to death. Suspicion about this problem and monthly chemoprophylaxis should be warranted in this situation as in dogs and cats.