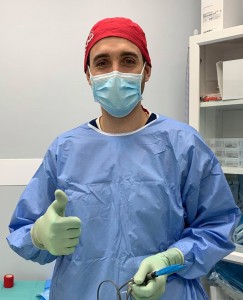 A 12 years old intact male labrador retriever was presented to the practice in 05.03.2021 with a history of diarrhea and hyporexia. The diarrhea was present for few days and the appetite was decreased for about 2 weeks but there were moments when the patient was eating normally. The patient was up to date with the booster vaccination and was regulary using antyparasitic treatment.

At the moment of examination the patient was bright, alert, with normal temperature (38.7 °C), the palpable lymphnodes were normal in size, nothing abnormal detected in the oral cavity and thoracic ascultation unremarkable. A mass of approximate 5cm diameter with soft consistency, mobile, and without local reaction on the surrounding soft tissue was identified in the xiphoid area.

Initially general blood tests including complete blood count, biochemistry, electrolytes and total T4 were performed as a routine screening in order to identify any abnormalities. The results from the haemoleucogram demonstrate mild microcytic hypochromic non-regenerative/ pre-regenrative anemia, neutropenia, monocytopenia and eosinopenia. On the biochemistry just hyperproteinaemia due to increased globulins was the single abnormality. Also the thyroid hormone was under the normal reference range (picture 1). 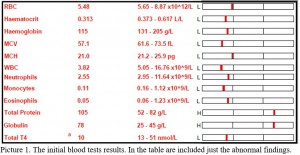 Aditional history: the last time when the patient went to a veterinary practice was 5 months prior for the regular booster vaccination.

Because of no evident clinical symptoms the presumption of chronic blood loss due to diarrhoea or anemia secondary to hypothyroidism was suspected. After discussion with the owner the decision of repeating blood tests in 4 days was taken. The patient was discharged with oral probiotics and was put on gastro intestinal veterinary diet to treat the diarrhoea. At reevaluation blood was collected and was send to the reference laboratory for complete blood count and blood smear interpretation, SDMA, Coomb’s test and C-reactive protein and complete thyroid panel including total T4, freeT4, cTSH, thyroglobulin autoandibody

The SDMA was normal also the thyroid panel was normal and negative on thyroglobulin autoandibody. The C-reactive protein was mildly elevated and the Coomb’s test was negative. On haematology the anemia had the same characteristics but was normocytic the reticulocytes and platelets under the normal limit. There were no modifications on the leucogram compared with the one performed at the first presentation (picture 2). 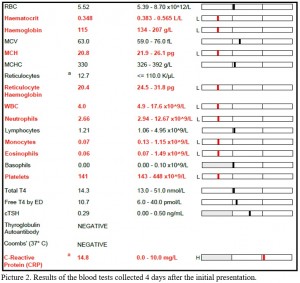 The blood film was evaluated and a mild microcytosis and no increased in polycromasia was noted. Marked rouleaux formation and occasional metarubricyte were present too and leucopenia was confirmed. Estimation of free platelets (3-8 platelets seen per HPF) suggested platelet numbers are mildly/moderately decreased with and very small platelet clumps seen was identified.

Based on the second blood tests (pancytopenia is observed but also marked rouleaux and occasional metarubricyte) and hyperglobulinaemia from the initial blood tests a suspicion of neoplastic disease like multiple myeloma or lymphoma less likely non-neoplastic disorders like monoclonal gammopatihes (Erlichiosis or Dirofilariasis) because the patient was regulary using antiparasitic medication and no history of travelling. In the same day results were reported to the owner and additional questions regarding the origin, travel status and lameness episodes were asked to the owner in order to find more informations. There was no history of travelling, the dog origin was United Kingdom and transitory episode of weakness were observed in the past months.

To investigate more the suspicion serum and urine protein electrophoresis, urinalysis including urine protein creatinine ratio, radiographs and bone marrow aspiration were recommended. Five days later the patient presented to the practice but the owner accepted initially just the non-invasive investigation and declined the x-rays and bone marrow aspiration. An additional in house haemoleucogram was performed at this stage to monitor the trend of the red and white blood cells (picture 3) 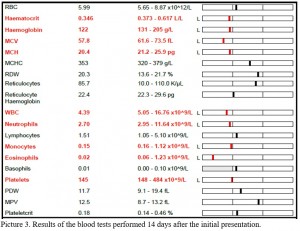 The urinalysis revealed proteinuria 3+ and a pH of 8 with active sediment and no crystals or casts, the urine beign collected via urethral catheterisation. The urine protein creatinine ratio was marked elevated (picture 4). 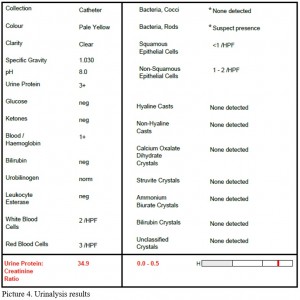 At serum protein electrophoresis hypoalbuminaemia was present with a mild increase in alpha 1 globulins and marked increase in gamma globulins migrating in a gamma region and a depletion of the globulins thereafter, consistent with a monoclonal band (picture 5)

The urine protein electrophoresis showed that majority of the protein was presented in the alpha-beta region and this was interpreted as overflow proteinuria secondary to the marked gammopaty present at the serum protein electrophoresis. No bands consisting with Bence Jones protein were noted but this would be masked by the overflow proteinuria (picture 6).

After these last results a highly suspicion of neoplastic disease was made. Radiography and bone marrow aspiration were recommended to confirm the disease. The owners were reluctant to put the dog under sedation because in the past he had general anesthesia and was not stable according to the previouse veterinarian. At this moment the patient was sent to a referral center to have the imagistic investigation.

In 09.04.2021 the patient arrived at the referral center for the last investigations. After clinical examination a firm mobile mass was noted in the caudal abdomen. Initially HLG, blood film evaluation, ionised calcium and 4Dx were performed followed by CT scan of the thorax and abdomen and fine needle aspiration of the liver, spleen and abdominal mass ultrasound guided. The ionised calcium was mild elevated (1.95 mmol/L), the 4Dx was negative. The haematology findings consist with normal white blood cell count with a slight improvement from the 5th March and a stable red blood cell count (HCT 31%) – with a mild non-regenerative anaemia. An initial review of the CT scan confirms the presence of a 4.5-5cm encapsulated mass in the caudal abdomen, with no obvious association with the intestinal wall. A small amount of free fluid is present between the liver lobes. After these investigations the patient was sent home with Fortekor as a treatment of proteinuria.

A detailed haematology showed a mild, normocytic normochromic, poorly regenerative anaemia (HCT 36.9%, reticulocyte count 95.05×109/L). His white blood cell and platelet count were low-normal. There was no evidence to support haemolysis and leucocyte morphology was unremarkable.

Aspirates from the liver and spleen identify a population of extremely atypical plasma cells, supportive of multiple myeloma. Prominent extra medullary haematopoiesis is also noted within the spleen.

Aspirates from the caudal abdominal mass show adipocytes and a mixed inflammatory cell population, comprising of neutrophils ageing in situ and undergoing pyknosis. An atypical plasmacytoid population is identified but in low numbers, suggesting infiltration with myeloma.

CT findings from the report

There are multifocal osteolytic lesions throughout the entire included portion of the skeleton, including essentially all included vertebrae (thoracic, lumbar, sacral), multiple ribs, the sternebrae, the proximal humeri, the pelvis and the proximal femurs (picture 7).

No soft tissue attenuating pulmonary nodules are identified. There are multiple small (<5mm), mineral attenuating, geometrically shaped foci throughout the pulmonary parenchyma (predominately within the periphery), consistent with benign osteomata.

The liver and spleen are diffusely mildly enlarged, with rounded margins, however they demonstrate normal attenuation and contrast enhancement. A mildly enlarged splenic lymph node is also present. 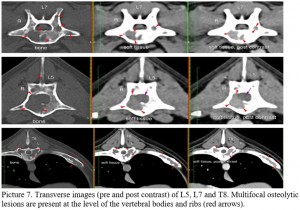 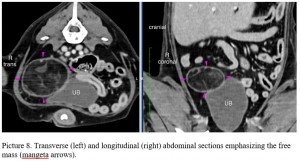 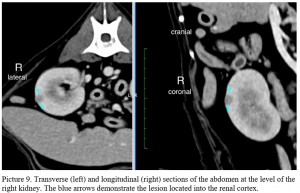 Multiple myeloma is a lymphoproliferative cancer arising from plasma cells and their precursors, characterised by clonal proliferation of plasma cells infiltrating the bone marrow and then affecting other organs such as the spleen. Diagnosis of MM usually follows the demonstration of bone marrow or

visceral organ plasmacytosis, the presence of osteolytic bone lesions and the presence of urine myeloma proteins. Renal disease is present in approximately one-quarter to one half of dogs with MM, and azotemia is observed in 30% to 40% of cats.

Bence Jones proteinuria was not evident in the pacient urine protein electrophoresis due to overflow proteinuria secondary to the marked gammopaty. Bence Jones proteinuria occurs in approximately 25% to 40% and hypercalcemia is reported in 15% to 50% of dogs with multiple myeloma. The clinical signs can vary from lethargy and weakness to inappetence, weight loss, lameness, polyuria/polydipsia, bleeding diathesis and central nervouse system deficits. The patient presented with a history of mild inappetence and isolated episodes of lameness.

Chemotherapy is effective at reducing malignant cell burden and to improve the quality of life of the patient. Variouse alkylating agents such as melphalan, cyclophosphamide, chlorambucil, lomustine can be used together with steroid therapy. The most common protocol is a combination between melphalan and prednisolone. This protocol is usually well tolerated by the vast majority of the dogs, the most clinically significant toxic events beign represented by myelosuppression and delayed thrombocytopenia.

After the last investigations performed at the referral center the patient started to deteriorate significantly this manifested by presence of a severe swelling over the left side of the face associated with pain and ptyalis. Two days later, a chemotherapeutic protocol including melphalan, cyclophosphamide orally with intravenous dexamethasone was started. Despite this, the dog developed neutropenia and pyrexia, raising concern for sepsis. As a result, a decision was made to euthanase him one day later.