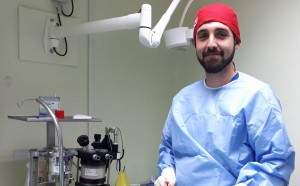 Defects located on the tail are challenging due to lack of skin. Second intention healing, skin grafts or random local flaps can be used as a treatment in this particular area. Primary closure can be used when small defects are present but risk of dehiscence and vascular compromise is very increased due to tension and tourniquet effect. In cats was described a perineal axial pattern flap used for covering a defect located on the proximal third of the tail. Also a “spiral closure technique” can be used to close small to medium size defects on the tail. The use of the advancement flap is usually the first choice in approaching the closure of defects if they can not be closed by undermining and suturing. This article illustrates the usage of advancement flap from the base of the tail for closing the surgical defect left after excision of a tumor located on the dorsal proximal third of the tail in a dog. No complications were noted after surgery and the tail maintained the normal function.

A 5 years old female neutered cross breed dog was admitted for assessment of a lump located on the tail. The owner was not sure for how long time the lump was in that place and how fast developed, was just recently observed on the tail.

On general examination no abnormalities were detected. A 4 cm mass was identified on the dorsal aspect of the mid proximal third of the tail. The mass had round shape, located under the skin and well attached to the coccygeus muscle. On palpation, local temperature was normal, elastic-firm consistency, without local pain. No other abnormalities were detected. Fine needle aspirate was recommended and performed before surgery.

Surgical site was aseptically prepared and the patient was placed on the table in ventral recumbency. Before starting the procedure, another evaluation of the mass in relation to the skin located on sacro-coccygeal area but also with the skin which surrounds the mass was done. Before incision, the skin mobility was checked. In physiological position a small skin fold was observed cranially to the lump (Fig.1). 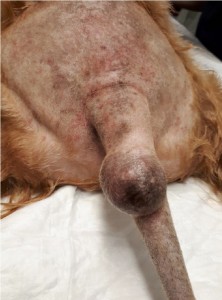 Figure 1. Preoperative appearance of the sacrococcygeal area after surgical site preparation. The tumor have a spheric shape, is located in the proximal third area of the tail-dorsal aspect and have a wide base of implantation. At the base of the tail a small fold can be observed

A circular incision was performed 3mm distance from the mass. No.10 scalpel blade was used to create the skin incision and the dissection until the muscle was done with Metzenbaum scissors.

A thin capsule that surrounds the mass was discovered at the junction between it and the coccygeal muscle. At that point the dissection was performed with the scalpel blade until the end. Care was taken to avoid the major vassels of the tail( Fig 2, Aand B)

Figure 2. Intraoperative view of the tail. (A) Right lateral side before tumor excision and (B) left lateral side after full excision hightlights the intact lateral coccygeal veins (yellow and black arrows). 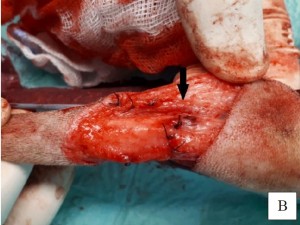 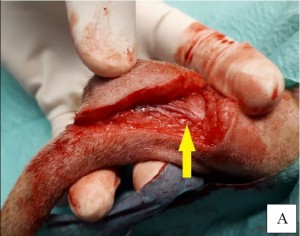 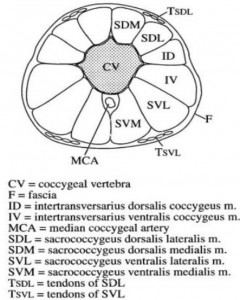 Figure 3. Transverse section at the level of caudal vertebrae illustrates distribution of the muscles

The tail movements are coordinated by 6 pairs of muscles (12 muscles in total) that are distributed concentrically over the coccygeal vertebrae (Fig.3).

on lateral sides and the median caudal artery and vein. In this case both caudal lateral veins were preserved. Minimal bleeding was present and the small blood vassels were ligated with 3/0 PGA. Two parallel lines extended from the proximal border of

(Fig.4 A). The flap managed to cover ¾ of the defect without tension. Undermining of the skin  located on the distal border was attempted to obtain the mobility that can help to cover the ¼ of the defect but faild. To obtain the maximum coverage, walking sutures were used to further advance the flap. The first bite went deep into the dermis and the second bite in the tendinous portion of the m.  sacrocaudalis dorsalis  lateralis (sacrococcygeus dorsalis lateralis).Few walking sutures were placed so that the tension is equally distributed (Fig. 4B).

Figure 4. Undermining and elevation of the skin flap. (A) Stay sutured were placed on the flap corners (yellow arrows) to manipulate the skin; (B) Closer wiev of the first walking suture. First bite (blue arrow) is inserted deep in the dermis and the second bite is inserted in the tendons of m. sacrocaudalis dorsalis lateralis (black arrow). 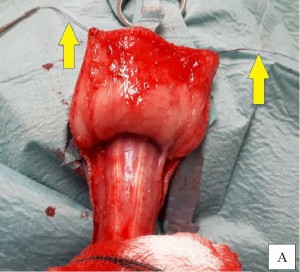 Nor following this procedure the primary defect has not been fully covered. In the end, horizontal mattres pattern (“U” shape) was used on the edge of the flap and full coverage was achieved under moderate tension (Fig.5). 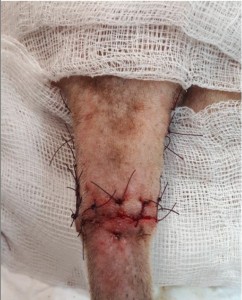 Figure 5. Dorsal aspect of the tail after final closure

Usually after advancing a flap “dog      ears” will result at the base. In this particular    case minimal “dog ears” were present. For a    cosmetic appearance and to preserve the soft     tissue, central suture technique was performed     on the lateral sides of the skin flap due to crescent    shaped defect. There are many ways to close up a crescent shaped defect but in this particular case central suture technique was chosen to avoid “dog    ears” removal. First simple interrupted suture was placed     in the middle of the defect and after, another  sutures in the middle of the two defects obtained   and so on until complete closure.

The central closure technique distributes the “dog ears” all along the sutures line in small increments (Fig.6a, 6b). In the end, the final aspect of the tail in relaxing position was changed due to advancement flap. The tail gain a curved up position (Fig.6). 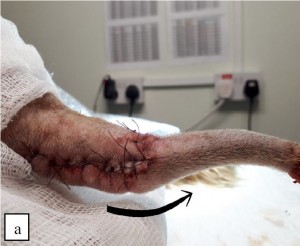 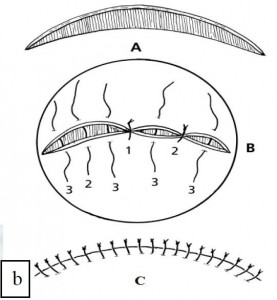 For protection, a soft padded bandage was      used to cover the surgical site, this being made up of  square gauze applied on top, fixed in place with an elastic band; Stirrups were applied over the gauze and  extended proximally to the base of the tail and Vetrap  was used as a last layer (Fig.7).

The patient was sent home with booster collar to prevent self trauma and 3 days of robenacoxib, also in the surgery day a NSAID injection was administered with the same nonsteroidal anti-inflammatory drug. Until the first recheck (3 days post surgery) the bandage has fallen due to excessive tail movement in 24 hours but the owner apply another one at home; Four days after surgery the patient present for the first recheck, on inspection the tail was less curved in compare with the day the surgery was performed and no complications were present. The owner reports the patient was comfortable at home after surgery, and did not show any changes in behavior. The same bandage was applied in the same manner and this time did not slip until the second visit.                 The patient has presented for sutures removal in day 10 aftert surgery . No postoperative complications were present and the tail was less curved upwords. One last visit was 34 days after surgery. Due to the weight of the tail, continous tension was applied on the skin over time and the natural position was regain (the processes of mechanical creep and stress relaxation) (Fig.8). The owner reptorts the patient was comfortable in all this period and does not seem to be disturbed by surgery.

Figure 8. Ventral (A) and right lateral (B) aspect of the tail after sutures removal – 10 days post surgery; (C) Dorsal view of the tail 34 days after surgery. 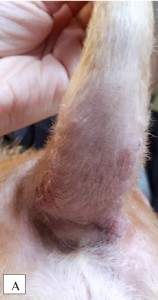 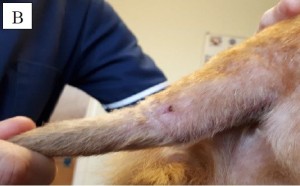 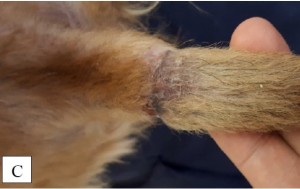 The mass (Fig. 9) was put into a containter with formol and sent to the lab for histopathologic examination. Pilomatricoma partially ruptured and mineralized, associated with moderate granulomatous inflammation. This is a benign tumour of the hair follicle, slow growing, non-invasive, and generally rarely metastasizes (malignant variant exists but is rare). was the diagnosis and clear margins were achieved and the prognosis is was good. Poodles, Schnauzers and Kerry Blue and Bedlington terriers may be predisposed. 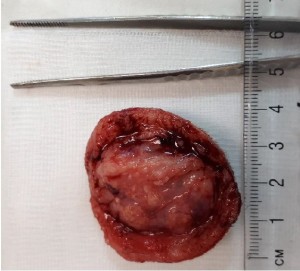 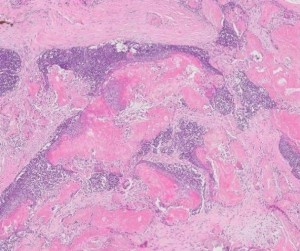