Stroke or cerebrovascular accident (CVA) is the most common clinical manifestation of cerebrovascular disease, and can be broadly divided into ischemic stroke and hemorrhagic stroke. CVA are characterized clinically by a per acute or acute onset of focal, asymmetrical and non-progressive brain dysfunction. Next cases show the both type of CVA in dogs.

1st case is about 9 years old female boxer. The dog was referring to the clinic with acute onset of seizures. The results of CBC and Biochemistry were normal and MRI was performed. 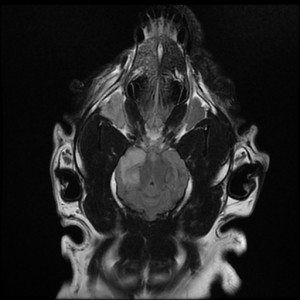 MRI findings: Intra-axial right piriform lobe and hippocampus lesion with impression of moderate swelling of these portions is present. The cerebral falx is only mildly displaced to the left. There is corresponding low T1 signal intensity in these sections of the brain suggesting edema. There is no enhancement of the lesion after contrast administration. The findings suggest that there is a non-hemorrhagic cerebrovascular accident in right forebrain of the dog.

The 2nd case is about  a 8 years old male Cane corso. The dog was present in the clinic with unilateral fore brain deficits and history of epileptic seizures. Biochemistry and CBC were normal and MRI was performed. 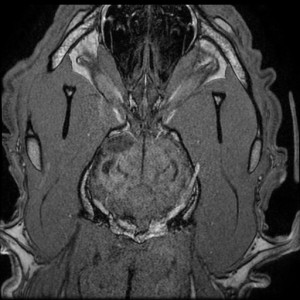 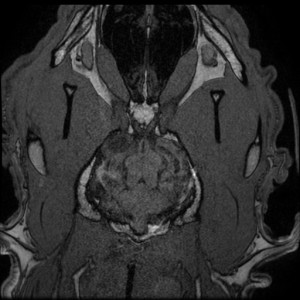 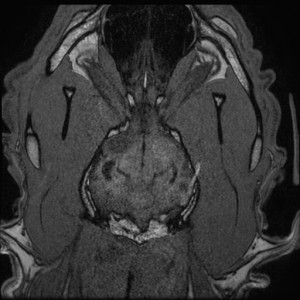 MRI findings : There is a well‐delineated T1 iso- to hypointense  and T2 hypointense  mass lesion with surrounding brain edema in right piriform lobe with a thin peripheral rim of contrast enhancement. There is a mass effect, displacement of the right lateral ventricle and midline shift to the left. This imaging feature is consistent with an acute to subacute intracranial hemorrhage.

MRI features of Hemorrhagic infarction in dogs may not be distinguishable from hematoma caused by vascular disruption. Imaging characteristics will vary depending on the size, location, and chronicity ofthe hematoma.

MRI features of Nonhemorrhagic Infarction in dogs include mildly T1 hypointense and T2 hyperintense  lesion with minimal  mass effect involving both gray and white matter on unenhanced MR images. These changes seen in ischemic parenchyma rely on an increase in tissue water content. Gradually, during the acute stage, the T2-weighted image becomes more hyperintense in the ischemic region, particularly over the first 24 hours. These signal changes seen in the first 24-hours are best appreciated in grey matter and are well visualized in deep grey matter structures such as the thalamus or basal ganglia, in addition to cortical grey matter. Gadolinium enhances infarcts because of vascular rupture but does not enhance ischemia or edema.