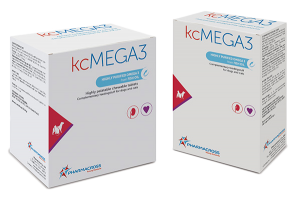 A correct dietetic approach is the key of the therapeutic management of either dogs and cats affected by CKD.

Renal diets have some characteristics:

It is wrong to consider a renal diet a “low protein diet” as there are still many diets with a lower content in proteins, addressed to other diseases, that are not good to be administered to patients affected by CKD.

Some renal diets underwent clinical trials in order to establish their efficacy in slowing the progression of renal damage or reducing the risk of mortality because of uremic crisis in patients affected from renal failure.

There is no consensus about the ideal protein content of renal diets for dogs and cats, although it is accepted clinical signs of uremia improve after a renal diet is administered to patients in IRIS stage 3 & 4. For IRIS stage 1 patients there is no consensus about the utility of a renal diet, but it can be introduced to treat other conditions such as proteinuria. The theoretical utility of a low protein diet in slowing the progression of renal damage in IRIS 2 dogs has not been demonstrated yet and is, therefore, anecdotally applied based on studies carried out in other species.

In another trial, cats with serum creatinine between  2.0 and 4.5 mg/dL were randomized into two groups, one feeding a renal diet and the other feeding a maintenance one; the renal diet reduced the risk of developing uremic crisis and death for renal causes.

Furthermore, a clinical trial studied the difference in survival times of cats feeding a renal diet compared to ones eating a maintenance one. Also in this case, there was a significant difference in survival time between the groups: a median of 633 days for cats fed with a renal diet and 264 for those eating a maintenance one.

It takes its time to make a patient accept a new diet. Passing to a new diet too fast as well as a force-feeding are all reasons potentially leading a patient to food aversion. Changing a diet too fast can also cause diarrhea, subsequent dehydration and worsening of renal function. The new diet has to be introduced in growing percentage compared to the old one, subdividing the period in 4 phases. Cats, and dogs with selective appetite, will be changing their diet in 4 weeks, while easier patients will be doing it in 2 weeks.

Therapeutic suggestions and evidence based medicine

Clinical trials demonstrated the efficacy of renal diet in both improving quality of life and survival time, other than reducing the risk of uremic crisis in dogs in IRIS stages 3&4 and cats in stages 2, 3&4. The real utility of a renal diet for dogs in IRIS stage 2 has not been demonstrated yet, although hyperphosphatemic patients may take advantage of a low phosphorus diet. Regardless the IRIS stage, the renal diet should be used in both proteinuric dogs and cats; its efficacy in reducing serum creatinine and urea is evaluated in 4 weeks.

Omega 3 fatty acids are widely used in both dogs and cats affected from chronic kidney disease (CKD). In dogs with proteinuric renal disease, clinical trials demonstrated the efficacy of Omega3 in reducing the protein loss and slowing the progression of renal disease and glomerular damage particularly if administered in association with antioxidants. In cats, no clinical trials evaluating the efficacy of Omega3 in slowing the progression of renal disease is available, although a retrospective study evaluating survival times of cats feeding different diets have showed a longer life-span in those cats eating the greater content of Omega3 fatty acids.

No data is available about the efficacy of Omega3 administered not in association to a renal diet. Both EPA and DHA are useful in course of CKD, even though diet should be supplemented with fish oils mainly represented from EPA and a fewer amount of DHA, at high concentration in EPA and low DHA.

On a side note, it has to be stressed Omega3 deriving from vegetal oils contain ALA, and are converted to a minimal part in EPA and DHA in canines, while cats are not able to convert ALA at all thus resulting in a lack of efficacy in case of CKD.

Content of EPA to be administered to renal patients is 80 mg/kg daily if associated to a renal diet. Pharmacross kcMEGA3, due to its high content of omega 3 fatty acids and the optimal EPA:DHA ratio meets the EPA content requirements for the health of the kidneys.

Mesenchymal stem cells (MSC) are multipotent stromal cells that can differentiate into a variety of cell types, including osteoblasts, chondrocytes, and adipocytes. There are evidences that MSC can be differentiated into oligodendrocyte and dopaminergic neurons, with further clinical applications.

Because the cells, called MSCs by many labs today, can encompass multipotent cells derived from other non-marrow tissues, such as umbilical cord blood, adipose tissue, adult muscle, corneal stroma or the dental pulp of deciduous baby teeth, yet do not have the capacity to reconstitute an entire organ, the term Multipotent Stromal Cell has been proposed as a better replacement.

3) under specific stimulus, cells should differentiate into osteocytes, adipocytes, and chondrocytes in vitro.

Duc, 12 years old German Shepard was presented at the clinic with progressive lameness of the pelvic limbs, which deteriorates in cold days, exercise intolerance and signs of severe pain. He was treated for over a year with NSAID (including selective COX-2 inhibitors), combined with food supplements. The treatment didn’t succeed to alleviate symptoms – in fact, when presented at clinic the patient barely could move his legs and have impaired urinary function.

After confirming the diagnosis with a radiographic examination (fig.1), and taking into account the age of the animal, we decided to attempt cellular-based treatment using adipose derived MSCs, rather than total hip replacement.

Biopsy of approximately 20 grams subcutaneous fat was taken and MSCs (CD44+, CD90+, CD105+) were derived, following standard protocol. After two passages they reached target concentration of 3.106cells/ml and were applied intra-articulary  in both coxofemoral joints. Pain alleviation with sub second improvement of the gait was observed 6 days after treatment, and 4 weeks after application of the MSC the dog tolerates long walks (over 40 minutes) and doesn’t show any signs of pain.

Six months after the procedure, Duc visited us again this time with progressive osteoarthritic changes in both elbows and cauda equina syndrome (fig. 2).   Another course of cell-based treatment was suggested – via intravenous infusion of stem cells, but the owner preferred topical treatment with hyaluronic acid. It was applied in both elbow joints, but after mild improvement Duc condition deteriorates (lameness with thoracic limbs, urinary incontinention, severe pain and loss of appetite) and after another 3 months he was euthanized.

It is remarkable that he never experienced pain in hip joints after MSC treatment. That fact and the fast recovery after first intervention were highly appreciated by the owner, but the relatively high cost of the cellular therapy, prevented him for taking the decision for another procedure

Lucky is a 5 years old miniature Poodle was presented in deteriorated condition with ongoing conservative treatment of CKD stage 3 (according to IRIS classification) After ultrasound examination we decided to include him in the program for MSC treatment.

Biopsy was performed and MSC were isolated and cultured to the therapeutic concentration (2*106 cells/ml).

Due to his severe condition cells were applied intravenously (to avoid general anesthesia risk). After initial improvement, Lucky deteriorated and discontinued food intake. Another procedure was made and this time cells were administered intra-renaly under the ultrasound guidance. Prior to that, he was subjected to a peritoneal dialysis, in order to diminish the levels of toxic metabolites. Unfortunately, no definitive improvement was observed and shortly after the procedure, the owners took decision to euthanize Lucky

Macho, 14 years old cat, was presented with typical signs of CKD (weight loss, decreasing of the appetite, polydipsia and polyuria). He was subjected to a peritoneal dialysis one year ago, after deterioration of his condition and since then was on a standard protocol for treatment of CKD i.e., nutritional supplementation and special diet.

After initial examination ,a biopsy of subcutaneous adipose tissuewas taken, and MSC were isololated and prepared for intra-renal application,which was made under ultrasound guidance.The improvement was quick and stable- the cat regained his appetite, and the values of creatinine measured after the procedure continues to decrease.

We work on a second case of a cat with CKD now.

Treatment of n.radialis paralysis in a cat.

Naida was found on the street and brought to our clinic with a dull trauma of  the abdomen, elbow bent low, curved dorsal paw and inability to stepping on his front right leg. Following the screening, we found lack of surface sensitivity on the rostral surface of the limb and lack of deep sensitivity. Our working diagnosis was trauma to the radial nerve. The condition is more common in dogs than in cats and is often the consequence of a hit by a car or falling from above. After considering other options as carpal arthrodesis, amputation or transposition of n.ulnaris we chose to start a procedure of MSC treatment.

Following the standard procedure, a biopsy from the abdominal adiposal tissue was taken and MSC were isolated and cultured. A highly concentrated stem cells isolate was injected into the perineural space of n. radialis.

Two weeks after implantation of mesenchymal stem cells we observed (although minimal) surface and deep sensation in the affected limb. Najda began to flex her elbow, indicating recovery of n. musculocutaneus.