The aim of this case report is to describe the technique and clinical outcome of limb salvage procedure in a cat with а distal segmental femoral bone deficit due to bone nonunion using customised expandable stifle arthrodesis plate.

3.5 years old female cat was presented to us after unsuccessful repair of multiple fractures of the right femur. The current condition of the cat was as follow: Gustilo-Anderson type 3b open intercondylar and distal diaphyseal femoral fracture, fracture of the femoral head, fracture of the greater trochanter, patella ligament rupture and extensive skin and soft tissue loss in the right stifle region (1). The aim of the treatment was anatomical reconstruction of the femoral fractures, temporary transarticular fixation and soft tissue reconstruction using ipsilateral mammary chain (caudal superficial epigastric  axial pattern flap) with a future plan of performing stifle arthrodesis due to a non repairable patella tendon rupture (2). Surgical goal was achieved, but sequestration of the whole distal femoral segment was confirmed radiographically  two and a half months after the revision surgery. As the owner declined amputation and insisted for limb salvage procedure, personalised 3D expandable arthrodesis plate was designed, fabricated and used for achieving stifle arthrodesis. 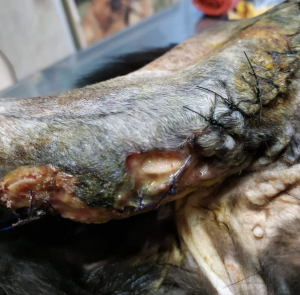 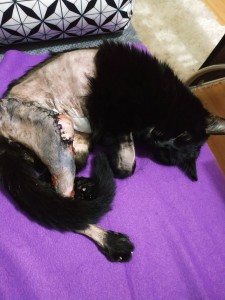 Picture 2-Shirley, soon after the first surgery when reconstruction of the femur and closure of the soft tissues were performed using caudal superficial epigastric axial pattern flap

Two radiographic examinations immediately postoperatively and five months after surgery were performed. Four months follow up x-rays showed no signs of periprosthetic bone resorption which seems to be in the main concern in this clinical case and whether the porous spacer will be integrated to both the femur and the tibia.

Designing and fabrication of the customised implant is a complex, time consuming and cost depending process, but 3D printed expandable stifle arthrodesis plate could be a realistic option for hind limb preservation in cats. Further cases and long term follow up are required to determine the success and complication risk of the procedure.

The femur is the most commonly fractured bone in cats, accounting for more than 30% of feline fractures (3). Those involving the shaft and the distal femur are most commonly seen. Inadequate fracture fixation leads to poor mechanical stability and further compromise of the biological environment, especially if there are migrating implants. The basic tenets for treatment of joint fractures are reestablishment of articular congruity, joint stability, axial alignment and preservation of joint mobility (4).  Patella tendon rupture is unusual condition and it is most commonly due to a sharp trauma (5). In our case, an iatrogenic rupture of the patella tendon was suspected due to migrating implants following surgical stabilisation of the distal femur fracture.  Arthrodesis of the stifle joint is a salvage treatment option if joint function cannot be preserved with another methods. Arthrodesis will leave the cat with significant gait alterations, and careful consideration should be made before electing for this option. The angle of fusion is estimated from the standing angle of the contralateral limb, and is around 110°. Strict attention should be paid to surgical technique to avoid complications. These tend to occur because of the long lever arm created, which can result in fracture of the femur or tibia at the implant–bone junction. Implants should end in metaphyseal areas and not over the narrowest part of the diaphysis to avoid this complication (6).

3.5 years spayed female cat was presented to us after unsuccessful repair of multiple fractures of the right femur. After removal of the existing implants, reconstruction of the articular fracture was performed using 2.4mm lag screw and antirotational K-wire. 2.0 mm SOP plate was applied as medial transarticular stabilising implant and for fixation of the supracondylar fracture of the femur. Two K-wires and tension band wire were used for fixation of the greater trochanter. The femoral head seemed already stable and no attempt for surgical stabilisation was performed.

Bacterial culture was done during the first surgery and the results came back as Methicillin-resistant staphylococcus. Based on antibiotic susceptibility testing, Amikacin was used as an appropriate antibiotic for seven days. Unfortunately no signs of fracture healing were noticed in the next 8 weeks and small fistulous tract appeared at the lateral aspect of the stifle joint.

Picture 3-Femur fracture configuration with loosed implants before, and the Picture 3-femur anatomically reconstructed after the revision surgery. At the most right radiograph – signs of osteomyelitis and sequestration of the whole femoral condylar segmen

In a subsequent surgery all implants were removed together with the distal femoral fragment, a transarticular external skeletal fixator was applied and CT was performed immediately after that. Bacterial culture has been obtained and came back again positive for Methicillin-resistant staphilococcus. Chloramphenicol was initiated for 7 days p.o. based on bacterial sensitivity testing.

A further attempt was initiated for designing and producing of expandable stifle arthrodesis plate. The aim of the proposed implant was to provide stifle arthrodesis but at the same time to replace the distal femoral segment for overall limb length preservation.  The implant was designed by CABIOMEDE Vet, Poland and consisted of two solid portions with locking screw holes and central porous portion for promoting bone ingrowth. The length of the porous part of the plate was 28mm and was intended to replace the missing distal femoral segment. 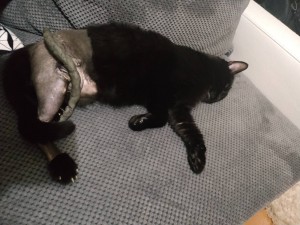 Picture 4-Shirley with an applied transarticular ESF, waiting for a stifle arthrodesis surgery 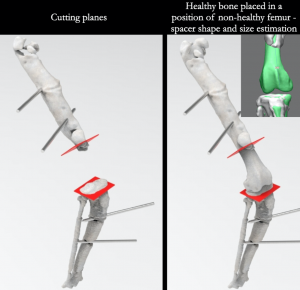 Two DCP holes were designed at both sides of the solid part of the plate in order to provide compression on the osteotomised bone segments against the porous part of the plate. The rest of the plate holes were locking ones and were arranged in such a way so they can engage each bones in a different angle providing some sort of orthogonal fixation and at the same time avoiding the holes form the existing ESF pins. The plate was designed to span almost the entire length of both the femur and the tibia, avoiding possible periprosthetic fracture. Limited contact under-plate surface was designed, reducing the implant footprint on the bone because of the concern of too much implant wrapping  and possible implant-associated infection. The customised implant and dedicated cutting guides were printed from Polygon Medical Engineering, Russia. 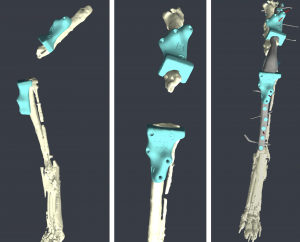 Picture 9-The stifle arthrodesis expandable plate is printed from titanium alloy (Ti6Al4V ELI) which is the gold standard for orthopedic implants when osteointegration is required. Figure 9

During the surgery, the patient was positioned in a lateral recumbency with the affected limb upermost and cranial skin incision was performed starting from the most proximal aspect of the femur to the the most distal aspect of the tibia. A standard lateral approach to the femur was made which continued over the cranial aspect of the stifle area and on the craniomedial aspect of the tibia. The cutting guides were secured and the bone ends were osteotomised. The plate was then attached to the cranial aspect of the tibia and the femur using temporary K-wires through dedicated holes.  The most distal tibial plate hole and the most proximal femoral one were designed for 2.0mm non locking cortical screw to be inserted in a neutral position and two gliding holes at both sides of the porous part of the plate for 2.4mm cortical screws in a compression mode.  Autogenous cancellous bone graft was obtained from the proximal aspect of the contralateral humerus and applied at both sides of the porous part of the plate. All needed 2.4mm locking screws  were predetermined and their length marked on the plate for faster and precise application. 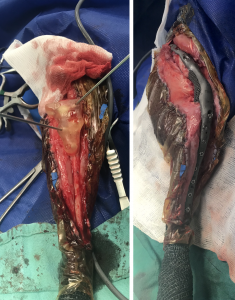 Picture 10-Tibial cutting guide on place and secured with K-wires (on the left). The 3D printed arthrodesis plate fixed to its final position (on the right) 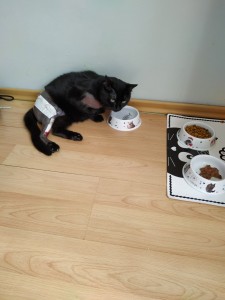 Picture12-Shirley a few days after performing the limb salvage surgery

This case report describes fracture complications in a feline femur multiple fracture and application of customised 3D printed expandable plate for stifle arthrodesis as a limb salvage procedure. The customised plate made of Titanium alloy has the features of the replacement of missing bone, providing initial fixation using screws (both non-locking and locking ones) and long-term bone fixation (bone ingrowth) (7). Our main concern was mainly the long-term bone ingrowth and the bending and shear strength of the plate at the porous/solid part of the implant.  Five months after the surgery (at the time of this article has been published) there are positive radiographic signs for osteointegration (no signs of peri-implant bone osteolysis, lack of osteolysis around the screws and progressive bone bridging over the porous part of the plate). In a recent paper (8), porous implants without hydroxyapatite coating showed a consistent bone ingrowth in a canine transcortical model.  Despite the concern of poor functional limb after limb sparing/fuse of the stifle joint (4) , our cat was performing extremely well and almost fully weight-bearing on the operated leg about ten days after surgery. Till today she improved her gait a lot and the limb use while she is running and playing with toys.

“Shirley is doing great. She really behaves as a kitten which never had an issue with that leg” – Shirley’s owner, 25.09.2020 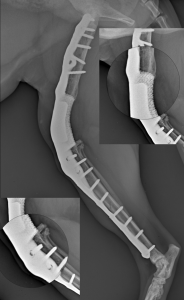 Picture 13-Five months follow up radiograph. Close up views to the bone-implant interface 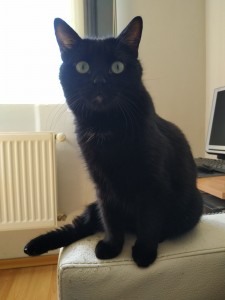 Picture 14-Abnormal sitting “on a side”. Shirley, about five months after stifle arthrodesis

2 weeks after the surgery: