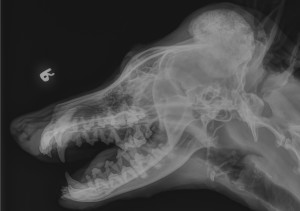 History:  presented for a large firm mass arising from the right side of the calvarium.

Findings: A dense, mineralized mass with a stippled appearance arising from the right side of the calvarium, with an approximate diameter of 6cm.

Because of the dense appearance of the mass, it’s hard to appreciate the degree of underlying osteolysis just with an Xray

A CT scan was recommended to evaluate local  invasion. 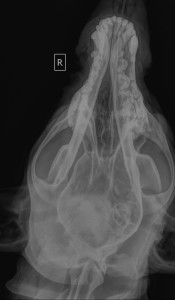 Discussion: MLTB is an uncommon tumour that arises almost exclusively on the flat bones of the skull, mainly on the calvarium, maxilla and mandible and tend to occur in older medium and large breed dogs, although they have been reported in younger and small breed dogs, and have also been reported in cats. It is slow-growing and locally invasive, often recurring after excision. Metastasis may occur