Mycoplasmas are bacterial organisms that have been placed in a separate class because of their small size. The lack of a rigid, protective cell wall makes them fragile outside the host but confers resistance to antibacterials that act by invoking cell wall damage.

They live on urogenital and respiratory mucosal surfaces in their hosts because they need a nutrient-rich environment. Their fastidious growth requirements and sensitivity to adverse environmental conditions, such as dryness and heat, complicate their diagnosis. They are difficult to culture without special media.

Several mycoplasma species have been found to be normal inhabitants of the upper respiratory and genital tracts of the dogs and cats and can be routinely isolated.

The diseases they cause involve inflammation of mucosal or serosal surfaces of the respiratory and urogenital tracts, joints, mammary glands and conjunctiva. Systemic spread often involves immunosuppression.  Some mycoplasmas may become intracellular, resulting in chronic persistent infections.

Mycoplasma and genitourinary infections in the dog

Isolating mycoplasmas in large numbers from the urine of dogs with urinary tract infection is not uncommon – most times mixed with bacteria, but also occasionally isolated in pure culture.

Mycoplasmas of the reproductive tract are considered to be opportunistic- they have been implicated in causing reproductive disease in the bitch, although they are also frequently isolated on clinically normal animals with no evidence of reproductive tract disease. The establishment of mycoplasma from vaginal swab or semen does not always correlate to reproductive disease. Clinical manifestation often results when an animal is under stress or exposed to high numbers of organisms. Clinical findings often are diversified and nonspecific. Mycoplasma spp. Infections should be considered a potential differential diagnosis for dogs presented for evaluation of coughing, dyspnea, fever, pollakiuria, hematuria, azotemia, lameness, mucopurulent vaginal discharge or infertility.

There are two ways of transmission for mycoplasma- aerosol, since they live in the respiratory tract, and venereal transmission.

Mycoplasma colonization of the vagina has been demonstrated following prolonged treatment of bitches with oral ampicillin and sulfonamides- this suggests that the wide-spread use of antimicrobial agents in healthy bitches should be avoided.

Samples in bitches must be obtained from the vaginal area close to the cervix and semen from stud dogs must be collected using a sterile technique, avoiding urethral contaminants. The samples should be sent to competent laboratories since mycoplasmas require special techniques for successful growth in cultures. PCR assays are also available for amplification of mycoplasmal DNA. Interpretation of positive culture results in sick animals is difficult.

A 6-year-old  female Giant Schnauzer had one normal pregnancy and parturition in the past.

The second pregnancy of the bitch was detected at day 30.  A week later the dog was lethargic and had vaginal discharge. Embryo resorption was confirmed by ultrasound. No tests were done. 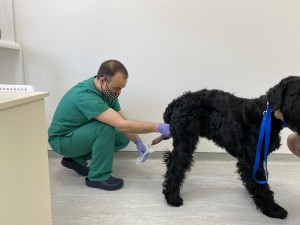 The dog visited the clinic for artificial insemination with fresh semen. A vaginal swab was collected and sent for PCR testing for genital mycoplasma, brucella, herpes and chlamydia. The results came back positive for Mycoplasma spp.

Doxycycline treatment was initiated 10 mg/kg once daily for three weeks.

During the next heat a retest was done and the results were negative. Transcervical insemination was performed using fresh semen from a male Giant Schnauzer who was also positive for Mycoplasma spp. and treated with doxycycline.

On the 53 day of pregnancy the puppies were stillborn and the bitch ate them. 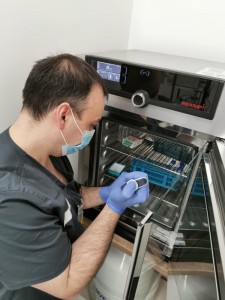 PCR testing of vaginal swab was positive for Mycoplasma spp.

Doxycycline treatment was initiated 10 mg/kg once daily for three weeks.

It was recommended to the owners to do a retest during next estrous.

A 2-year-old  female Giant Schnauzer failed to get pregnant after the first mating. The reproductive cycle after that was normal.

The results came back positive for Mycoplasma spp. after the dog was inseminated. The treatment of choice  was enrofloxacin for 10 days. AI was unsuccessful. The male that had direct sexual contact  with the Schnauzer was also positive for Mycoplasma spp.- after administration of  doxycycline 10 mg/kg once daily for three weeks his second test was negative. 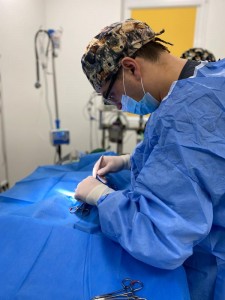 A Cane Corso in heat was admitted for monitoring of estrous.

She was bred by artificial insemination at her last season  but failed to conceive.

The owners shared they had other bitches that mated, but did not get pregnant. The PCR test was positive for Mycoplasma spp..

Therapy with marbofloxacin for 21 days was recommended and also PCR test for the other dogs, isolation and antibiogram.

When a bitch’s past medical history includes failure to conceive and resorption of fetuses, especially when the estrous cycle was normal, a test for sexually transmitted diseases should be done. It’s recommended to identify the microorganism and do a sensitivity test.

Mycoplasma spp. Is just one of the many factors that affect canine reproduction.