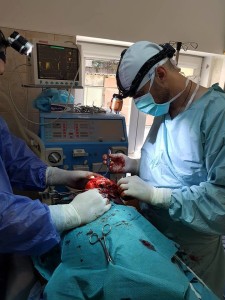 Osteochondrosarcoma is an uncommon tumor that generally arises from the skulls of dogs (cranium, orbit, zygomatic arch, mandible, and maxilla) and can occasionally arise from the pelvis, ribs, and os penis. These tumors have a characteristic appearance on radiographs, CT, and MRI: generally the borders of the tumor are sharply demarcated with limited lysis of the adjacent bone, with a coarse granular density throughout. A popcorn-like appearance with stippled and heavily calcified or ossified regions has been described on survey radiographs. 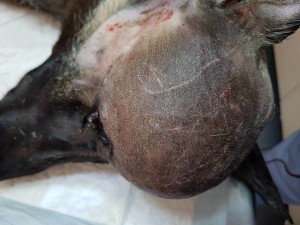 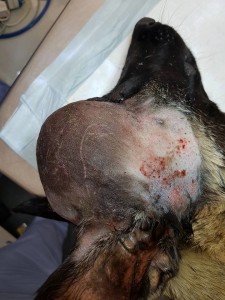 Cara, a one year unsterilized mallinois female bitch, from the age of 7 months beggin to develop in the fronto-parietal region a globular formation(fig.1-2-3)

.She came to our unity with neurological manifestations, ataxia, deviation, refusal to rise from the bottom, bilateral midriasis.

Blood analyzes where in optimal parameters. After performing the CT, a giant extra and intra-cerebral form was noticed, being the imaging feature of the osteocondrosarcoma. (Fig.4-5) 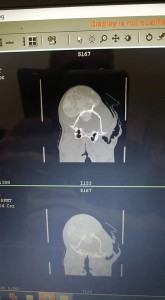 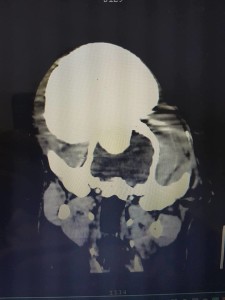 After consulting with the owner we decided surgery.

It was performed a large, circular craniotomy with a safety margin of one cm. The formation did not adhere to dura mater, only compressing the brain. (Fig. 6-7-8-9) 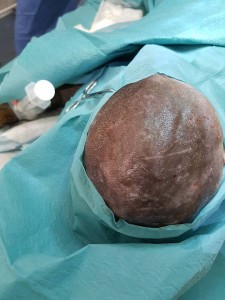 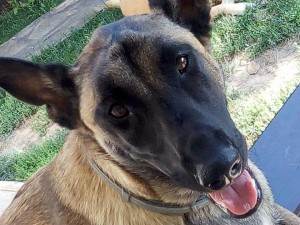 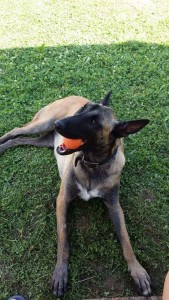 he bone reconstruction was accomplished with Collapat, a substrate of bone based on hydroxyapatite and collagen. (Fig.10) 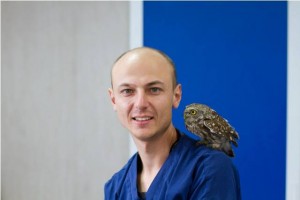 Uterine tumors consist of 0.3 to 0.4% of all canine tumors. Leiomyomas and leiomyosarcomas are the most common, accounting for approximately 90% and 10%  respectively. These are tumors which arise from smooth muscle cells. The gastrointestinal tract is most commonly affected, but these tumors could affect also the genitourinary tract, the spleen, the liver and the subcutaneous tissue.

The etiology of uterine tumors is still unknown. Mutations of the fibroid-type mediator subcomplex 12 gene (MED12) have been found in a few canine genital leiomyomas but the role of these mutations in uterine tumors is unknown. Canine uterine leiomyomas may be hormone-dependent, as this appears true in humans and in the case of canine vaginal/vulvar leiomyomas.

Uterine tumors can be clinically silent for a long period of time. Intact females may exhibit abnormal estrous cycles, with or without vaginal discharge. Dogs with uterine neoplasia may be infertile. Stranguria, dysuria and or constipation may occur secondary to physical obstruction by the mass. Abdominal distention, with or without a palpable abdominal mass, may be detected. Nonspecific signs of anorexia, lethargy, depression, weight loss, polydipsia, polyuria and vomiting may also be present. Some of these signs may be related to concurrent pyometra within the abnormal uterus.

A  6 year old huskey, female intact was presented with complaints that it hasn’t been able to defecate normally for about a week. The dog was anorexic and during the last 2 days it started vomiting. 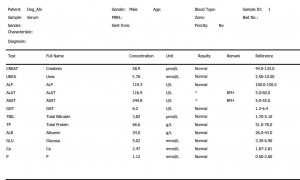 Clinical examination: The dog was in a depressive state, with normal temperature – 38,6˚C. The dog felt discomfort after abdominal palpation. The heart and lung sounds were normal. After examination of the genital area pale secretions from the vulva were discovered. 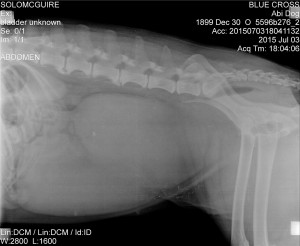 An X-ray of the dog’s abdomen was taken and a large mass located at the caudal part of the abdomen was discovered(fig.). This mass was compressing the urinary bladder, and the small and large intestines. The rectum was empty. After that we did an ultrasound of the abdomen and we found that this is a solitary mass, with hyperechoic density. Before going to surgery we took another X-ray of the thorax – everything was normal. 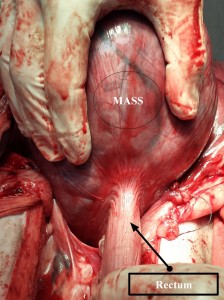 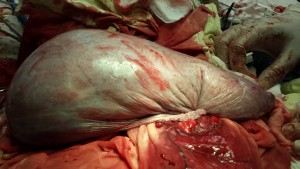 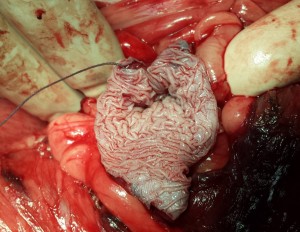 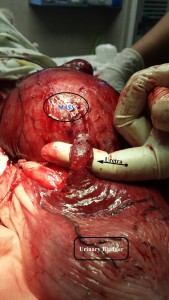 The dog was put under general anaesthesia and diagnostic medial laparotomy was performed. A large mass, coming from the uterine cervical area, was discovered. This mass was connected with the rectum and the urinary bladder (fig.3;4)The surgery from the begging started as normal ovariohysterectomy. The two ovaries were visualised and a ligature was placed on around the suspensory ligament and the vessels of the ovaries within the broad ligament and after that the uterus was separated from the mesometrium. When we reached the mass, we started to bluntly dissect the mass from the urinary bladder and the rectum. We managed to remove the mass from the rectum without complications. We separated the urinary bladder and about 3 cm of the urethra (fig.5). We did one linear cut of the proximal part of the mass – about 1-1,5 cm away from the urethra. This was tissue that was covering the tumor and when we opened a hole in it the neoplastic lesion was accessible for removal (fig.6). Slowly we separated the tumor from the rest of the tissues and we put a circular suture around the remnant vaginal tissue.Additionally we put several simple interrupted sutures of the same structures and at the end we managed to close the defect (fig.7 and 8).

After that the area was cleaned with saline and the surgery was finished in a standard way.

The removed mass was with size 27/14 cm and weight of 1,3 kg. This is the biggest uterine mass removed at this point at my practice (fig.9). The mass was sent to a foreign laboratory for histology (fig.10). The results were consistent with Leiomyoma.

The only complication during the postoperative period was urinary incontinence. We treat this with Propalin(Phenylpropanolamine) but to this point the dog didn’t respond and is still incontinent. During the last conversation with the owner we discussed control check-up and additional treatment plans for the incontinence.

Leiomyomas are benign tumors that comprise 85-90% of all canine uterine tumors.2 They tend to be slow growing, noninvasive, and do not metastasize.Usually  an ovariohysterectomy is curative.