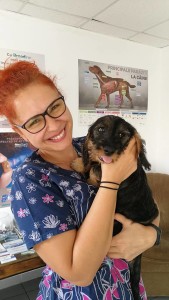 Anamnesis: the dog and it’s owner are very close to our vet practice, they ask for anual hematology and biochemistry exams, abdominal ultrasounds  x-rays just for prevention. In the 19th of September 2018 the owner called beacause her dog was not being herself, she was not eating for 24 h and she thinks the dog is in pain.

Clinical findings: when the dog got to our practice she was lethargic, with pale mucose membranes, tahicardic, dispneic and with an enlarged abodomen.

Blood samples were taken and the results were:

We performed and ultrasound and there was free fluid in the abdomen and after the paracentesis we removed aprox. 300 ml of blood from the abdomen. We suspected an abdominal hemorrage.

After a few hours of i.v fluids (aprox 2000 ml NaCl 0,9%) to reestablish blood volemia we decided to do a laparatomy.

Thoracid X-rays were free for pulmonary metastasis. At the ecocardiography the heart was free of any mass in the right atrium. 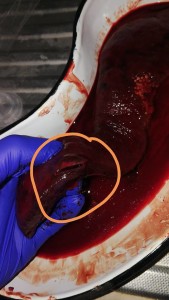 ** Note that we did not made that incision, this is how the spleen looked like

Splenomegaly with ruptured spleen was our main concern, we did a splenectomy and removed aprox 4L of free blood from the abdomen. The splenectomy was made with sutures and the attached omentum was removed in bloc. A thorough abdominal lavage was made and the instruments were changed to minimize the risk of metastatic seeding. 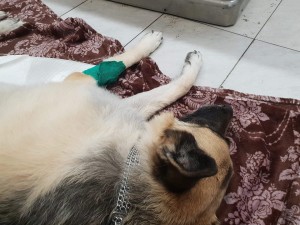 A sample of the spleen was sent to the histopathology lab. That night we performed a blood transfusion from a 60 kg Tossa Inu. 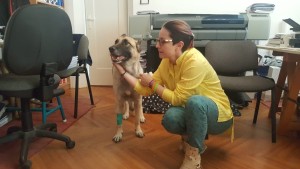 *next day after surgery

The next morning the dog was feeling great, she ate normal, she waig her tail and everything was great.

I also tested cardiac canine troponin I (a marker with high specificity for cardiac injury) at PraxisLab in Budapest to check for miocardial metastatic modifications but the result was normal ( <0,25) .

Treatment: it has been 2 months since the surgery and splenectomy was the treatment of choice at that time.

She received ONCOSUPORT (RX) and a shot of 3 ml of Theranekron (Tarantula cubensis extract) every 5 days.

We finally found Doxorubicine and we started the treatment with the following protocol:

-Doxorubicine 30 mg/m2 = 16 mg/38 kg every 2 weeks for 5 treatments. It does have a cardiotoxic effect but if the dog lives long enough I will continue as much as I can.

Other drugs that can be used with a antiangiogenic effects are : Masivet, Thalidomide, Palladia. 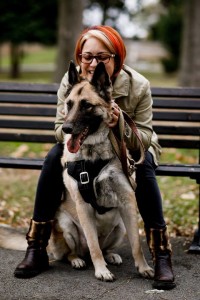 The prognosis with dogs with haemangiosarcoma treated with splenectomy only is really poor, 2-3 months surviving time after surgery. Even with chemiotherapy the surviving time of 12 months is only 10%. Median survival time with spelectomy and doxorubicine is 132 days.