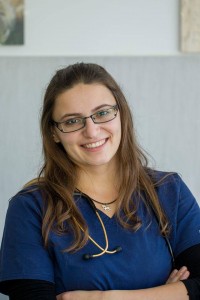 Canine transmissible venereal tumor(CTVT),also known as transmissible venereal tumor (TVT) or Stickers’s sarcoma, is a  transmissible cancer, that affects dogs. CTVT is spread by the transfer of living cancer cells between dogs, usually during mating. It’s normally localized at the external genitalia of male and female dogs, also at the oral and nasal cavities. Immuno-compromised and generally unhealthy dogs are predispose of leishmaniasis associated to genital TVT, and especially in a dogs living in Mediterranean region. CTVT  may also be transferred by licking, sniffing  or parturition. Clinically, CTVT lesions are red to tan, friable, verrucous to multilobulated masses, predominantly affecting genital organs, and are usually ulcerated and inflamed. Metastasis is uncommon ,but  is usually seen in regional lymphnodes. Other reported sites of metastasis include skin, subcutaneous, brain, eyes, spleen ,liver, musculature, lungs, anus, bones, kidneys ,testicles and  mammary glands.  Leishmaniasis is a vector-borne diseases with wide geographic distribution affecting humans, dogs and several wildlife species. Depending on the infecting Leishmania species and the immunocompetence of the host, the infection can result in visceral (CanVL), cutaneous or mucocutaneous disease.  CTVT and CanVL can overlap epidemiologically particularly in regard to their geographical distribution. In recent study was  found  that Leishmania sp.   has tropism for the canine male genital tract. CanVL has been previously identified concurrently with canine transmissible venereal tumor as well as Leishmania amastigotes within CTVT neoplastic cells.

CASE REPORT-  A 10 yrs old mixed-breed female dog Lucky was presented in Blue Cross animal hospital  in Blagoevgrad on 01.04.2019 in a state of  prostration. The dog had been adopted from the street. On presentation Lucky was in a very bad body condition-cachectic  with pale mucosa membranes , muscle atrophy, onychogryphosis and two large cauliflower-like, ulcerated, hemorrhagic vaginal tumor masses. (Figure 1). The skin examination showed generalized alopecia with lice infestation and diffuse seborrhea. There wasn’t any lymphadenomegaly detected. Abdominal ultrasound examination didn’t show abnormalities in the spleen and other organs. 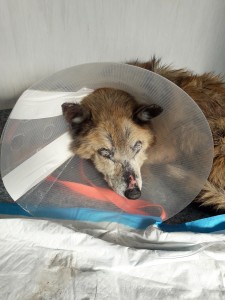 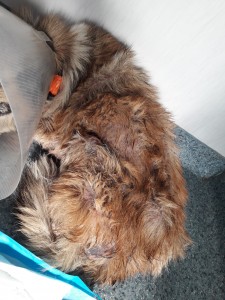 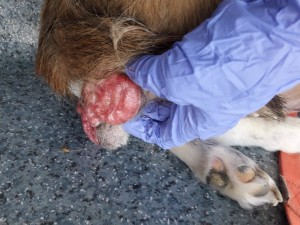 A  complete blood(cell) count (CBC), serum biochemistry profile were performed along with a Snap 4Dx test to screen for vector borne disease agents  Dirofilaria immitis (heartworm disease),Erlichia canis (ehrlichiosis) ,Anaplasma phagocytophilium (anaplasmosis) and Borrelia burgdorferi (Lyme disease)  and test  for Leishmania detecting antibodies. In addition, skin scrape of the few places on the skin and  fine needle aspiration cytology of the vaginal mass was done. The CBC revealed anemia, haemoglobinemia, Leukocytosis (lymphocytosis, granulocytosis).The serum biochemistry profile revealed hyperglobulinemia, hypoalbuminemia, low A/G ratio, hypocalcemia. The dog was positive for E.canis, A.phagocytophilium and Leishmania Ab. The skin scrape was negative for demodicosis and scabies. A fine needle aspiration cytology   of the vaginal mass revealed a neoplastic  round and ovoid  cell population with some inflammatory cells. Every cell is containing single ,large and  round  nuclei. The abundant cytoplasm was delicately granular and optically empty. The cells had an characteristic for transmissible venereal  tumor (TVT).(Figure 2) 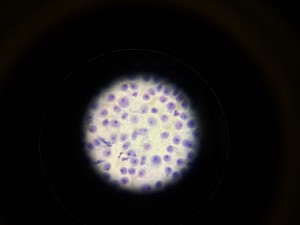 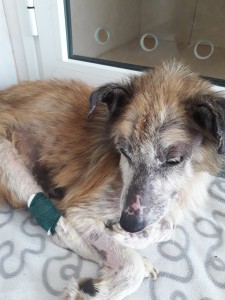 Treatment with doxycycline 10mg/kg,p.o. q12h for 30 days for ehrlichiosis and anaplasmosis was initiated. In addition Milteforan  2mg/kg,p.o. q24h  for 28 days and Allopurinol 20mg/kg,p.o.,q12h for 6 to 9 months was initiated for treatment of Laishmaniasis. The dog get   also every day, some supplement for the skin like omega 3 and omega 6 amino acids  and every 3th day topical treatment with shampoo with ketoconazole and chlorhexidine. The dog spent  20 days in the clinic, during that time Lucky get really improved (figure 3 ).

For the TVT treatment with vinciristine sulfate 0.6 mg/kg/m2, I.V., q7d for a total 8 treatments was initiated. The dog was monitored  with a CBC every week. Photographs of the vaginal tumors were taken at each follow up visit to monitor the progress. After the second vincristine treatment there was visible improvement. The mass had decreased in a size.(fig.4and 5) 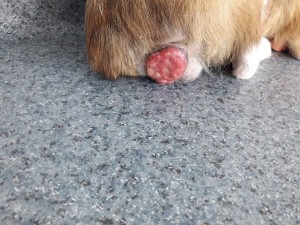 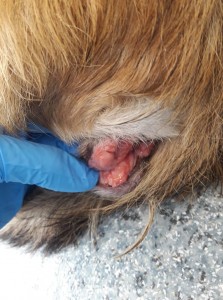 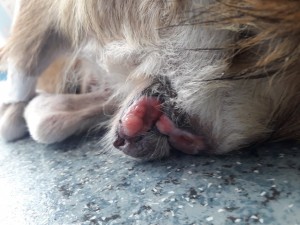 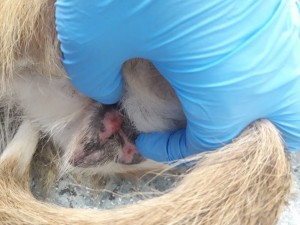 By the f ourth week only a small remnant of the mass was visible(fig6). 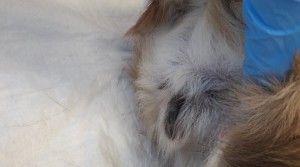 Fig 7- 7th week of the treatment

During the all treatment there was no decreasing of the  thrombocytes, CBC was completely normal. There was no side effects  of the vincristine treatment.

The patient was fully recovered. The treatment with Allopurinol is stopped. Sixed months after the last vincristine treatment, Lucky was doing great, no TVT recurrence. Neutering of affected dogs can be beneficial to decrease distribution  of the vaginal tumors. 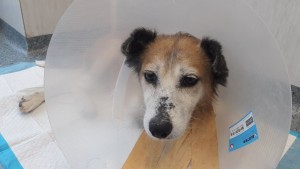