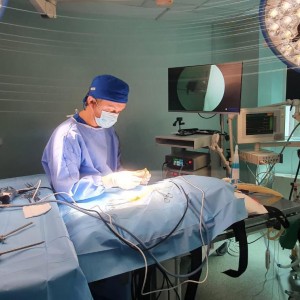 Septic peritonitis is an inflammatory condition of the peritoneum that occurs secondary to microbial contamination. Septic peritonitis may have a wide variety of clinical courses and outcomes, with high morbidity and mortality. The definitive diagnosis usually relies on the identification of toxic and/or degenerate neutrophils with foreign debris and/or intracellular bacteria in the peritoneal fluid. A thorough understanding of the treatment options and prognosis is crucial to decision making and comprehensive care.

Despite the numerous advancements in recent years, severe abdominal sepsis (with associated organ failure associated with infection) remains a serious, life-threatening condition with a high mortality rate in both veterinary and human medicine.

Vacuum Assisted Closure is a type of therapy used mainly for wound closure; it works by reducing atmospheric pressure on the wound bed.

In septic peritonitis the advantage of Vacuum Assisted Closure is that the system gently pulls fluids out of the abdomen, removes bacteria and helps clean the peritoneal cavity.

The system requires special dressing, a vacuum pump and various types of cycles can be used.

The patient is an 2 years and 6 months old American Staffordshire Terrier, intact female. She presented on September 14th for vomiting. The vomit persisted even after simptomatic treatment, so further investigation was recommended. 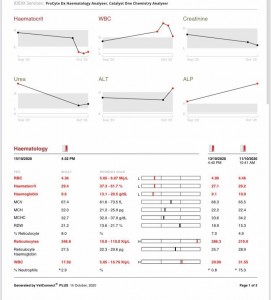 On abdominal ultrasound (performed by my colleague, dr. Raluca Munteanu) – a jejunal foreign body with a diameter of 2.4 cm was diagnosed (attachment 2). 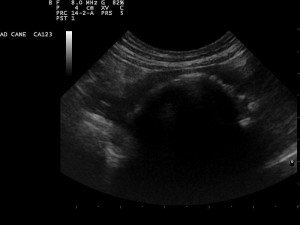 Surgery was performed and a nut was retrieved from the patient’s jejunum; also, marked ischemia of the involved intestine was seen and it was decided to continue with an enterectomy of the affected area. 10 cm of jejunum were excised and a termino-terminal apositional suture was performed.

On September 15th the patient was discharged and treatment was continued with Amoxicilin + Clavulanic Acid, Metronidazole, Omeprazole and Sucralfat for the following 7 days. 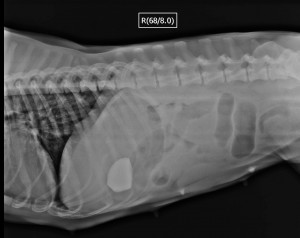 Patient was discharged with simptomatic treatment, but the vomiting relapsed on October 8th; new abdominal radiographs were performed, free peritoneal fluid and gas were detected and a laparatomy was recomended. 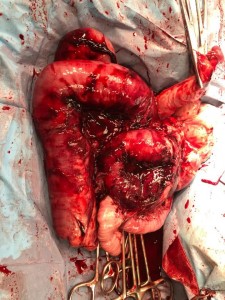 General anaesthesia was induced according to standard protocol. An exploratory laparatomy was performed and multiple adherences were diagnosed (pic  4); at the point of the previous suture no leakage could be identified, but the intestine was distended with gas and fluid cranial to the enterectomy site. 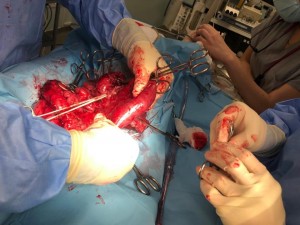 Another enterectomy was performed, this time the excised part being approximately 60 cm of the jejunum. Duodenum and ileon were individualized and maintained (picture 6).

After copious peritoneal lavage (500 ml of sterile saline/kg) we decided to try VAC with an open peritoneum for septic peritonitis management. We used an VivanoMed® Abdominal Kit (attachment 7). 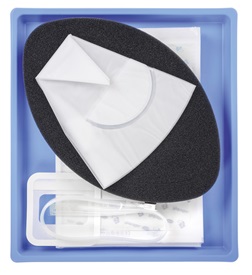 The abdominal wall was sutured to the sponge in the VivanoMed® Abdominal Kit, the draining machine was attached to it and a leakage test was performed (video 1). In order to secure the abdomen a tie-over bandage was used to keep the VAC machine in place.

For the next 5 days continous pressure was applied at 40 mmHG. During the first 2 days, approximately 1 litre of septic fluid was drained. In the next 3 days, less and less fluid was obtained. 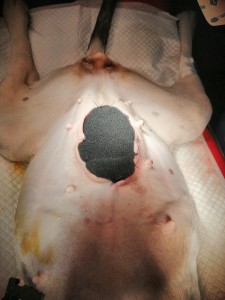 On day 5, another surgical intervention was performed in order to change the usable parts of the VivanoMed® Abdominal Kit. The following 5 days, fluid collection was decreased and smears from it showed marked reduction of bacteria. On the 10th day no more bacteria could be identified in the peritoneal fluid.

On the 10th day, the abdominal kit was removed and routine abdominal closure was performed. Patient was discharged from the hospital and further evolution was good. On the 14th day recheck patient showed no more vomits, stool was normal and general status was good.

During VAC therapy – creatinine, BUN and albumin were monitored (attachment 8 and 9) 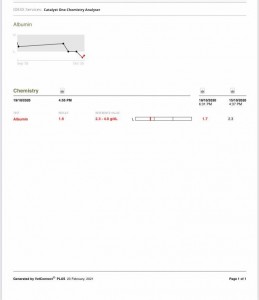 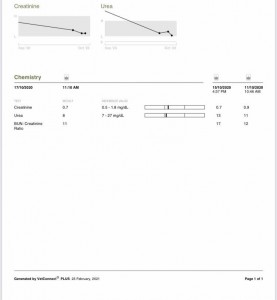 . Even though hypoalbuminemia persisted throughout the hospitalization period, there was no need for albumin suplementation as no peripheral oedema had developed.

Septic peritonitis is a complex process initiated most commonly by a bacterial focus, causing damage and inflammation of the primary and surrounding organs and usually culminating in circulatory shock, multiorgan failure and death. This process has been historically difficult to treat, with high mortality rates in both veterinary and human patients, despite aggressive medical and surgical treatment.

In this patient a deffinitive source for peritoneal infection could not be determined during later procedures; it is hypothesised that bacterial translocation could have occured secondary to increased permeability of the intestinal mucosa. It is also hypothesised that ingestion of the second foreing body (the gastric stone) was just a simptome of gastrointestinal disturbance.

During the 10 days of VAC treatment patient was hospitalized and closely monitored. Fluid production decreased after the first 2 days of treatment; on the last day no more fluid could be retrieved from the peritoneal cavity. Although the dog was managed with an open abdomen, no signs of pain or discomfort was seen. The patient managed to go out for walks with the VAC machine attached to the abdomen. Pain was controlled with buprenorphine – 10 mcg/kg every 12 hours. During the entire period antibiotherapy was continued and, after VAC placement, steroids (prednisone) were started at a dose of 1 mg/kg/24 h.

Even though in the first days after surgery the patient had developed a short bowel syndrome, on the 14th day recheck stools were back to normal. It is believed that the organism adapted to the shortened jejunum and digestion and absorbtion normalized.

At the time of publishing, the patient is doing well and is now back to presurgical weight and general status. 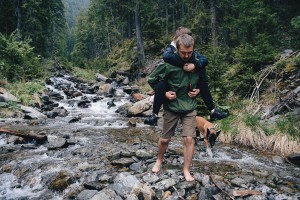