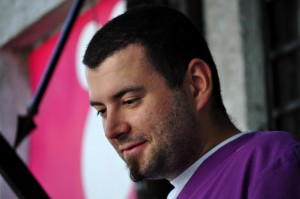 The most common cause of rear limb lameness in the dog is rupture of the cranial (anterior) cruciate ligament. This derangement results in degenerative changes (osteoarthritis) in the stifle (knee) joint, including cartilage damage, osteophyte (bone spur) production, and meniscal injury. The Tibial Plateau Leveling Osteotomy (TPLO) has proven effective in returning these deranged stifles to full function.

Developed by Dr. Barclay Slocum, TPLO was a radical procedure for addressing canine ACL injuries. Now in existence for over 20 years, the surgery has proven itself, time and time again, to be an extremely effective long term solution for addressing cruciate ligament injury in dogs.

Part of the positive indications for TPLO are:

TPLO is most frequently performed in medium to giant breeds. Greater bodyweight is a positive indicator for selection of TPLO as a treatment option. The procedure can be performed and on small dogs and even cats, but then should be make exact discretion the potential benefits and complications.

Cruciate ligament degeneration is seen increasingly in young large breeds, in some cases within their first year.

Minimising osteoarthritis in the long term is a priority for these young dogs. Many surgeons believe that this leads to the TPLO being the technique of choice, although long term comparative studies continue to investigate this. These cases frequently show bilateral degeneration, and partial cruciate ruptures are common.

The procedure is good option for dogs over 6 months of age, with progression of ossification of proximal tibial growth plates.

Cases of partial ligament rupture show a very rapid iprovement following TPLO. Importantly, they typically do not progress to complete ligament failure as TPLO acts to neutralise the forces on the cranial cruciate ligament.

TPLO is widely accepted to give the best functional outcome, in the short to medium term, and has enabled working/performance animals to return to high functional standards.

Average plateau angles range from 22°-26°, but angles from 15° are still remain a TPLO candidate with good post-operative outcome. However, in cases with an increased tibial plateau angle, TPLO has proved particularly beneficial.

Case studies have advocated TPLO as the technique of choice for even small breeds with excessive tibial plateau slopes. In some of those cases the amount of angular correction required leads to a Wedge resection technique being favoured over the Slocum(curved-cut) TPLO.

Occasionally the stifle will rest with the tibia cranially translocated following cruciate rupture the tibial crest is  palpated cranially, the patella tendon is less distinct, and the first movement during cranial drawer is backwards, often associated with a dramatic degree of movement. In some authors experience these cases may return to cranial translocation with significant recurrence of lameness weeks after extracapsular lateral fabella suture placement. In those cases, in a limited number of procedures, TPLO have shown better outcomes.

Overall, the good TPLO candidate is medium to large breed dog, from 6 months and plus, active, with need of full functional restoration of the limb.

This is the case of Hades. He is oversized cane corso, 6 years old, bodyweight is 78 kg and he suffers from hip arthrosis of the right hip in result of hip dysplasia and chondroma of right carpal bones. He came with lameness on the right rear limb from few weeks, which is worsening. He had and positive “sit and drawer tests.

This is video of his walk: 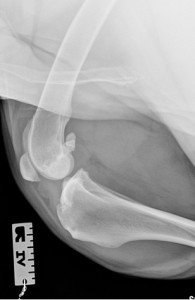 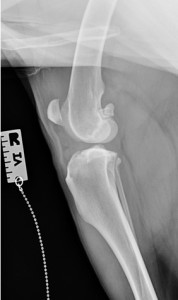 My favorite procedure is TPLO, but definitely no one can be sure that, the standard procedure can give good outcome with this size dog. Furthermore, the dog have and two other problems on the right side. We were afraid from implant failure so we decided to make insurance. Instead only the TPLO plate we placed and second DCP 3.5 mm plate. The original idea was to use 3.5 screws for the 2-nd plate, but because of the risk from caudal cortex fracture the most distal three screws was 2.7 mm 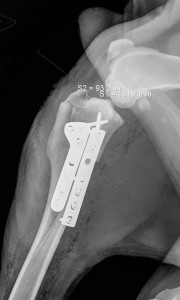 Those are intraoperative pictures and the immediately post-op pictures: 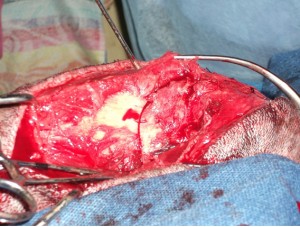 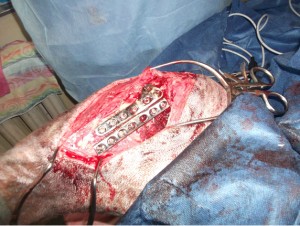 Video 14 day after the surgery:

X-ray pictures 45 days after the surgery: 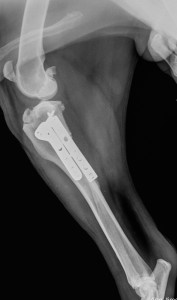 And this is the final result – 6 months after the surgery: 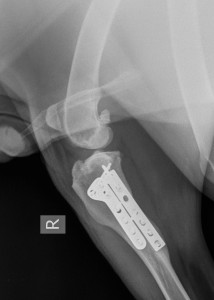 The TPLO remains one of the best surgically ways to manage CrCrLR even in oversized dogs, even with concomitant diseases of the locomotor system.

The most important thing is every surgeon to make optimal assessment of the patient’s status and to remember that every case is specific.