A 14 kg, 13-year-old female cocker spaniel for truffle hunting was examined for a swelling in the perineal region. As informed by the owner the bitch had given birth once in the past and was in heat two months ago. The swelling appeared one year ago, but had enlarged aggressively the previous month. The dog had been facing difficulty defecating. 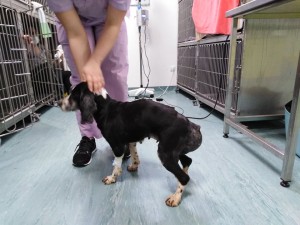 Clinical examination revealed palpable little dense masses in the mammary glands. The swelling turned out to be a firm vaginal mass compressing the colon.

CBC and biochemistry profile showed no changes.  An ultrasound showed no accumulation of fluid, the ovaries were normal, the bitch was in anoestrus.

Owner was recommended surgical removal of the mass with episiotomy and castration.

The patient was prepared in advance for vaginectomy in case  removal of the mass with episiotomy was impossible.

Episiotomy was performed for examination of the masses. We started removing them consecutively with an electrosurgical knife. Their location was beneath the mucosa and were removed easily without loss of wall integrity. A part of the vaginal mucosa was hyperplastic so it was also removed. The urethra was unaffected. The vagina was sutured and it’s normal structure was restored.

The second part of the surgery was ovariohysterectomy. No changes in the ovaries and uterine were visualized.

After the castration, careful visual inspection of the uterine stump and the vagina led us to a big mass in the pelvic cavity that compressed the colon.  The abdominal cavity was opened caudally to pecten ossis pubis and the uterine stump was pulled cranially. The mass was localised at pars cervicalis. After it’s removal the vaginal wall was sutured. 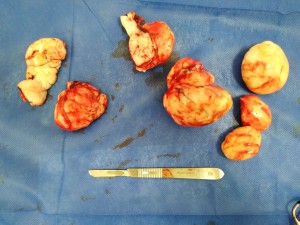 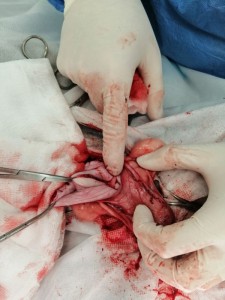 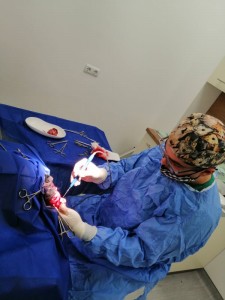 The recovery was smooth.  Control of the urine bladder was kept and normal defecating restored.

The postoperative edema disappeared in 2 weeks.

Tumors of the female reproductive tract are divided in two categories: arising from the ovaries and those derived from the tubular genitalia.

Genital tract tumours are usually seen in medium-aged (mean age 10 years) non-spayed dogs. Vulvar tumors in dogs are rare- 2,5% of all canine tumors with 70% of them being benign.

Smooth muscle tumors and polyps of the tubular part of the genital system are common in the bitch. The growth of many of these benign tumours is associated with the ovarian secretion of oestrogen. Therefore, unless the bitch is receiving exogenous oestrogens, it is very unusual to find them in an spayed animal. Leiomyomas appear to be steroid-hormone dependent-  around 56% of them have estrogen receptors and 84% express progesterone receptors.  This type of tumor is associated with estrogen secreting tumors or ovarian follicular cysts. Spontaneous regression has been observed after castration or treatment with progesterone receptor antagonist.

About 85% of leiomyomas occurring in the reproductive tract in the bitch arise from the vagina, vestibule and vulva. Boxers are predisposed.

Benign vaginal tumours may present as either extraluminal or intraluminal forms. Extraluminal are usually well encapsulated and their growth results in a noticeable perineal swelling. Intraluminal tumours tend to be attached to the wall of the vestibule or vagina. The are often ovoid and firm. Sometimes they can protrude from the vulva. Large intraluminal tumours may become traumatized, oedematous and infected and their appearance may be similar to that of vaginal hyperplasia. Sometimes  with the development of the tumour mammary gland tumours, ovarian cysts and cystic endometrial hyperplasia can be seen simultaneously.

Benign tumours can reach 10-12 cm in diameter. When it’s small the consistency is fleshy, but as it develops it becomes firm and hard  due to increase in connective tissue ( so called “fibroid”). Small vaginal masses are are asymptomatic unless protruded form the vulva and they can only be discovered by coincidence during vaginal inspection.

Clinical signs include bulging of the perineum, dysuria, stranguria, haematuria, vulvar bleeding and discharge, faecal tenesmus, constipation. Usually there are no changes in the CBC.  Radiographs of the caudal abdomen may suggest the presence of vaginal tumor but will not be enough for a definitive diagnosis or it’s location. Endoscopy is an excellent way to visualize the vaginal mucosa and the presence of polyps. Histological examination is considered to be the gold standard in determining the type of the tumor. Surgical resection with ovariohysterectomy ( reduces the risk ot recurrence) provide great outcomes for patients. Digital vaginal and rectal examinations are performed monthly to monitor for tumor recurrence.