Paradoxical Vestibular Syndrome is a condition that affects flocculonodular lobe or the caudal cerebellar peduncle of the cerebellum and causes vestibular signs. These parts of the cerebellum participate in central components of vestibular apparatus and are responsible for the maintenance of equilibrium and coordination of head and eye movements;
This syndrome is called paradoxical vestibular disease because the head tilt and circling occur contralateral to the lesion. There is usually some evidence of cerebellar disease on neurological examination, such as ipsilateral dysmetria and head tremor.

History: The owner noticed that the head of his dog is not in normal position and is tilt to the left. The dog was carried to its personal doctor, and the doctor had doubts that the dog was having problem with the inner ear . The doctor refer the dog to me for computer tomography, and for approval of the diagnosis.

Clinical examination: Internal body temperature 38,1 ; Respiratory rate: 36 breaths per minute ; Color of mucous membranes – pink; CRT – 1,5 sec.
Puls 110 bpm ; The overall condition of the dog was normal and there was no no signs of pain.

Neurological examination:
Mentation and behavior-normal; Posture – Left head tilt; Gait – Vestibular ataxia, increase muscle tone and dysmetria of right fore and hind limbs The dog react with cranial and spinal normoreflexia. Menace response reaction of right eye was a little bit reduced. There was no change in conscious proprioception and bladder function was normal. The owners report for intention tremor of the head when the dog is waiting to be fed.

Case work-up:
CBC and Biochemistry were normal. Magnetic resonance of the head was performed with GE MRI 1.5 Tesla. 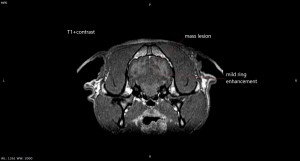 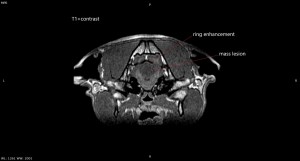 MRI findings :
A single oval T1-hypo and T2, T2 FLAIR-hyperintensive intra-axial mass is observed, leading out of the cerebellar vermis and affecting the both cerebellar hemispheres. The mass is well circumscribed by the surrounding tissues, with extracapsular expansion and diffuse infiltration into the the gray matter. There is a significant mass effect that reveals compression of the flocculonodular lobe and reveals obstruction to the flow of cerebrospinal fluid with secondary dilatation of the quarter ventricle and central canal with subsequent syringohydromyelia.
Diagnosis: Cerebellar neoplasia
Treatment:
The clinical condition of the dog did improved after i.v
infusion with Mannitol (0.25g/kg bolus 3 times over 20 minutes) , Harmann`s solution 20ml/kg and Prednisolone p.o 0.5mg/kg – 2 times daily – for 3 days . Next 10 days the dog take Prednisolone 0.5 mg/kg 2 times daily at home.
Control visiting on the 14th day -https://www.youtube.com/watch?v=XRyp9sgqCjE

All of previous clinical signs were more severe present. There was no more improvement with this therapy and the owners chose to euthanize the dog.
With both central and peripheral Vestibular syndorme, the head tilt, circling and nystagmus typically occur ipsilateral to the side of the lesion. Less frequently, lesions affecting the caudal cerebellar peduncle, the fastigial nucleus, or the flocculonodular lobes of the cerebellum can cause central Vestibular disease with a resulting paradoxical head tilt. Bilateral Vestibular disease is characterized by head sway from side to side, loss of balance on both sides and symmetrical ataxia with a wide-based stance.  A physiological nystagmus usually cannot be elicited and a head tilt is not observed.