An inguinal hernia is a condition in which the abdominal contents protrude through the inguinal canal or inguinal ring, an opening which occurs in the muscle wall in the groin area.

Most inguinal hernias are uncomplicated and cause no symptoms other than a swelling in the groin area. However, if contents from the abdominal cavity (such as the bladder, a loop of intestines or the uterus) pass through the opening and become entrapped there, the situation can become life-threatening.(2) 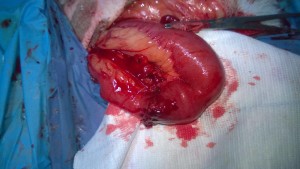 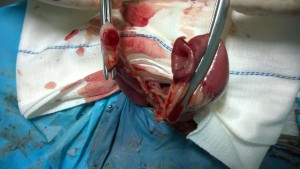 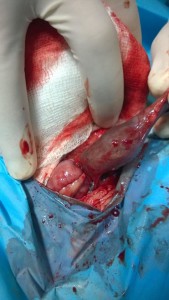 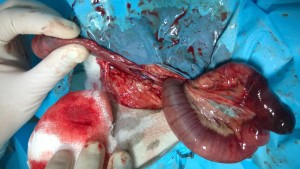 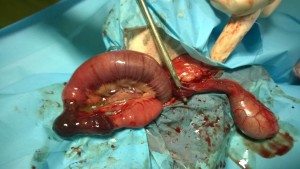 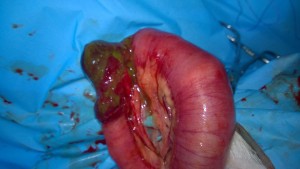 Inguinal hernias can usually be diagnosed by finding the swelling caused by the hernia on a physical examination. However, sometimes contrast radiographs (X-rays) or an abdominal ultrasound are needed to determine which abdominal contents, if any, are entrapped.(2)

A six year old intact male jack russel terrier,fully vaccinated and dewormed  suffering an episod of  letarghia, voma  and apatia for two days.He followed an symptomathic treatment with painkillers and antispastics from his current veterinarian.

The owner became worried because his symptoms got worse, so he was admitted in our clinic as an emergency after the program hours.

-the left testicle was increased in volume

An abdominal ultrasound was performed, was noticed a decreased intestinal motility, with gas presence.

The pacient was initially rehydrated, after stabilization of vital functions was put under general anesthesia and intubated.Surgical intervention was performed, starting initially with the opening of the affected testicle who was enlarged, coloured modified  and continuing with medial celiotomy(Fig.1).The terminal part of the small intestine was herniated inside of the spermatic cord (Fig.2).The affected part was aproximatly 10 cm long, with modified tissue and with the rupture of the intestine wall. (Fig 2,3,4) .Following this an enterectomy was performed (fig. 5) with termino-terminal enteroanastomosis.( Fig. 6,).The pacient was also castrated.

The patient condition improved very fast within hours he drank water and ate food.He was also very responsive and playful from the first day.He followed five days of treatment with Metronidazol (20 mg/kg/2×1/day).

The inghino-scrotal hernia is a medical emergency and the intervention must be in the shortest time due to life threatening.