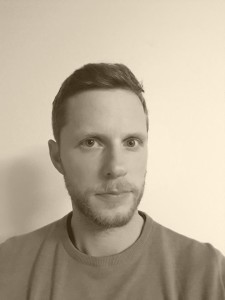 Department of Orthopedics and Neurology

Luna is a lively 1,5 year old German Boxer, weighing 28 kg. She was presented to us with chronic intermittent right front leg lameness of grade II lasting for almost a year. Her owners noticed a lump on her medial carpal site. The dog had a history of a car accident when she was only six months old. At that time Luna was treated conservatively with NSAIDs and rest. Luna became worse after time and she was reffered.

Carpal joint is a hinge joint. It is composed out of six carpal bones that are arranged in a proximal and distal row forming three levels of joint spaces; the antebrachiocarpal where most of the joint motion takes place, the middle and the carpometacarpal space. 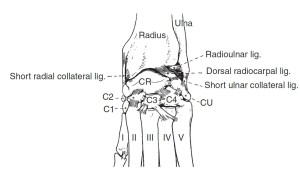 Joint`s stability is provided by ligaments of the carpus. Carpal ligaments are very stiff and short mostly crossing only one joint level. (image 1), (1)

Luna was afebrile, lame on her right front limb, grade II. Her right front limb was shaking while standing and her carpal joint was slightly flexed. Right carpal joint was obviously swollen on the medial side. Carpal range of motion was mildly decreased in flexion, distinct pain was observed on flexion of the carpal joint and by pressing on the firm medial swelling. No apparent instability could be observed while doing clinical exam but only slight valgus. The rest of physical and neurologic exam was normal. 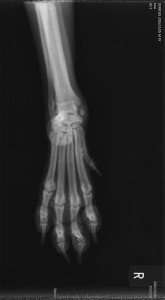 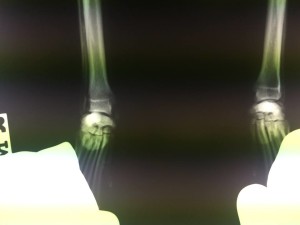 Orthogonal and stress radiograms of both carpal joints were made and beside increased opacity of medial carpal soft tissue, extensive mineralisation near medial carpal compartment was noticed most apparently on the craniocaudal view. Stress radigraphs showed moderate instability on the medial side of all carpal joint levels. (image 2 to 4)

Decision in making the right therapeutic approach was difficult. After taking under consideration all of the data especially chronicity of the problem, we advised the owners do a pancarpal arthrodesis. Chronic instability is by far the most common indication (in 76% of the cases) for (pan)carpal arthrodesis. (2)

We could also try to do a synthetic ligament reconstruction but since the problem was present for almost a year, the instability was present in multiple medial carpal levels and the dog did not improve, arthordesis seemed like a prudent decision. 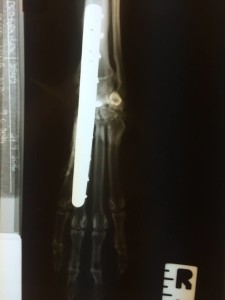 Image 5 : postop, with slightly suboptimal compression, but due to hybrid locking plate it healed uneventfully

Image 6: postop, with slightly suboptimal compression, but due to hybrid locking plate it healed uneventfully

Hybride pancarpal arthodesis locking plate (Veterinary instumentation)  (2,7 – 3,5) was used for the procedure, taking care to cover 75 % of third metacrapal bone, which resulted in a strong stabile environment and rapid healing with quick return to good postoperative function. External coaptation with a splinted bandage added extra support for the first three weeks after procedure. (Image 5 and 6)

Luna did have some problems with compensation for the first two weeks after the splint was removed, but than started to improve consistently. Follow up xrays at 4 and 8 weeks were unremarkable.

Luna is a very active young German Boxer who was intermittently but progressively lame for the last year. A chance to reconstruct the torn medial ligaments of carpal joint was probably unknowingly lost when the instability was missed at the first veterinary visit almost a year ago.

Dispite apparent instability prooved on xrays, we were not sure how much it contributed to a development of chronic tenosynoviitis but we presume that the proximity of two structures resulted in abductor pollicis longus tendinopathy as well or differentially looking could also be a sign of an old avulsion fracture.

1 Fractures and Other Orthopedic Conditions of the Carpus, Metacarpus, and Phalanges, Part II: fractures and orthopedic conditions of forelimb, in BRINKER, PIERMATTEI, AND FLO’S HANDBOOK OF SMALL ANIMAL ORTHOPEDICS AND FRACTURE REPAIR, Fourth Edition, 2006, by Elsevier Inc., page 382, chapter 14