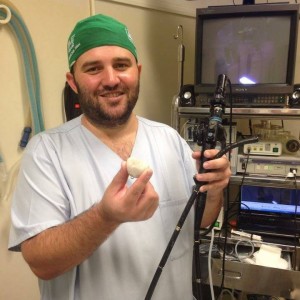 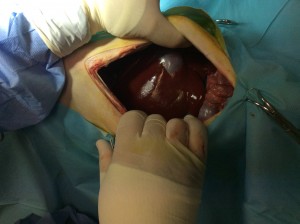 The gastro-esophageal intussusception is an acute pathological state, caring a grave prognostic. It appears as an intussusception of a part or the whole stomach in the distal esophageal area.
The causes and mechanisms are not well known, but it appears that the main predisposing factors involved are: the laxity of the esophageal hiatus, esophageal hipomotility and megaesophagus. 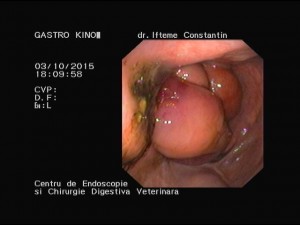 I will try to be as thorough as possible in these few lines. The case had more than one medical complaints, rarely encountered and diagnosed in veterinary medicine, but fairly interesting for us, surgeons.

History
Kino is a 5 year old Berger Blanc Suisse patient known for his gastro-esophageal pathology. He was diagnosed at the age of 6 months with congenital megaesophagus. A few months later he was diagnosed endoscopically with ulcerative gastritis cause by Helicobacter (diagnosed on cytology). He suffered three interventional endoscopies – one for removing a foreign body and the other two for dilating the hypertrophic cardiac sphincter with an achalasia balloon.
From when he was first diagnosed with megaesophagus, Kino received antisecretory, antiemetic and prokinetic treatment, and he was fed blended food from a vertical surface.
At this time, Kino’s clinical signs were far worse than all the other appointments in the clinic. The owner complained he had been vomiting and regurgitating after drinking water for no less than 40 times in the past 12 hours.

Abdominal palpation was unrewarding. The patient was cachectic, weighing 25kg (low under the breed standard bodyweight of 40kg).
We drew bloods for a complete blood count, biochemistry and a electrolyte count and set up a peripheral iv line for fluids and symptomatic medication. 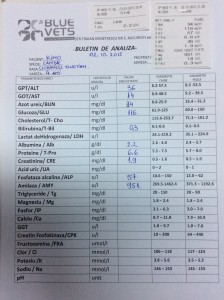 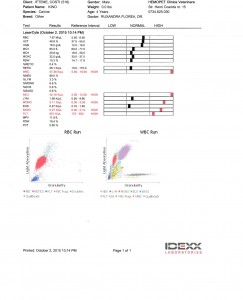 • Slightly decreased HCO3 due to the hypovolemic shock
• Blood pH level 7,46
• Mild increase of BUN and Creatinine levels due to dehydration
• Mild hypoalbuminemia due to the esophageal pathology
• Leukocytosis with high Neutrophil, Monocyte and Basophil counts
• Mildly increased platelet counts

Based on the clinical signs and the results of the blood work we suspected an acute inflammatory / septic process, but we couldn’t figure out the primary cause of these severe symptoms.
We then recommended an ultrasound examination and x-rays. The A-FAST abdominal ultrasound we couldn’t see the stomach and spleen.
The x-rays showed an increased opacity in the thoracic segment of the esophagus (most likely food content). Furthermore, another increased, oval, well defined opacity was noticed in the caudal area, next to the cardiac sphincter. The measurement was 179mm/89mm. The lungs also presented an increased interstitial pattern. 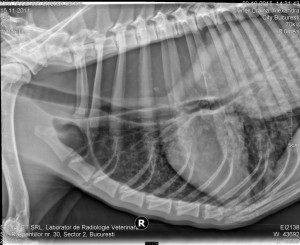 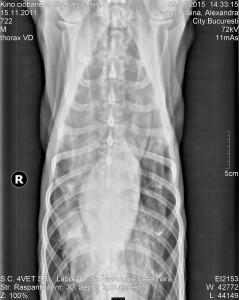 During this time Kino was on CRI with: Ringer fluid and Duphalyte and received antiemetic and antisecretory medication (maropitant and pantoprazole). He also received antibiotic therapy with ceftriaxone.

His clinical signs did not improve whatsoever during the first 12-15 hours since admission in the clinic. Moreover, he was now vomiting blood.
The clinical signs and the tests results pointed out a presumptive diagnosis of gastro-esophageal intussusception and aspiration pneumonia.

Once the owners signed the consent form, we had the patient sedated with butorphanol and midazolam for the surgical preparation.

On complete sedation, the patient was gently aspired with the surgical vacuum to prevent the worsening of the preexisting clinical signs (aspiration pneumonia)
We induced the patient with propophol and preceded the endoscopic examination with a large caliber Olympus video-endoscope, commonly used for digestive tract procedures. We found large quantities of liquid and purulent discharge in the respiratory tract (larynx, trachea and bronchi), which we completely aspired. We then had the patient intubated and anesthetized with isoflurane.

.
The next step was the endoscopic examination of the esophagus where we vacuumed a mixed liquid and food content, found in large quantities. In the lumen of the distal esophageal area we could see the gastric mucosa.
The gastric mucosa presented with hyperemia and small ischemic areas. We tried to endoscopically reposition the stomach in the abdominal cavity, but with no results.
The third step of the procedure was the exploratory laparatomy with diagnostic and curative intend. Upon examination we noticed the mispositioning of the stomach and partly the spleen. 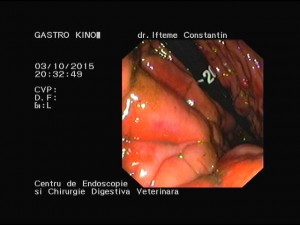 We repositioned the stomach and the spleen by gently pulling the duodenum until we saw the antral area and continued with gentle pulling of the stomach until we achieved continuity of all the digestive segments.
The cardiac and the fundic areas of the stomach showed inflammation and the gastric mucosa was hypertrophic. No ischemic lesions were noticed due to prolonged stasis. We also assessed this finding during the post-interventional endoscopy. The spleen was partly torsed in a small region, near the splenic head. 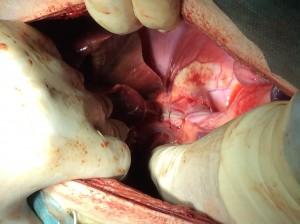 We continued exploring the abdominal cavity and found a lax area near the diaphragmatic hiatus, which had contributed significantly to the “herniation” of the stomach in the mediastinum and ultimately in the esophagus – therefore Kino was also diagnosed with hiatal hernia.

We reduced the hernia by placing resorbable sutures near the diaphragmatic pillars. During this procedure, we placed a large caliber oral-gastric tube (12mm) in the lumen of the esophagus to prevent any potential strictures.

We continued the surgery with a gastropexy, placing sutures from the gastric antrum area to the right abdominal wall, next to and including the 12th rib.
Finally, at the end of the laparatomy, we “washed” the abdominal cavity with saline at body temperature (38 degrees C) and then aspirated the content with the surgical vacuum.
We ended the procedure with a tracheobronhical lavage and aspiration with saline at body temperature.
The final endoscopic examination of the superior digestive tract, esophagus and stomach showed that the pathological changes had been reversed and the prognosis in this case is favorable. 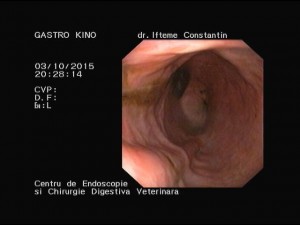 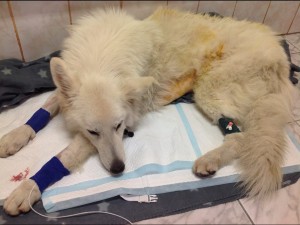 • Endoscopic examination of the: bronchi (taking samples for cytology, bacteriology and mycology) and the digestive tract.

Conclusions:
The gastro-esophageal intussusception is a major surgical emergency, having severe clinical signs, irreversible with conservative therapy and caring a grave prognosis.
The endoscopic examination and the x-rays are the most important tests for a definitive diagnosis.
If the simple x-rays are inconclusive, barium x-rays will show a esophageal obstruction.
The treatment is surgical and it requires repositioning the stomach in the abdominal cavity, gastropexy and rectifying the hiatal hernia. The endoscope can also be used curatively in the treatment of small gastro-esophageal intussusceptions by blowing air in the esophagus.
Possible complications: 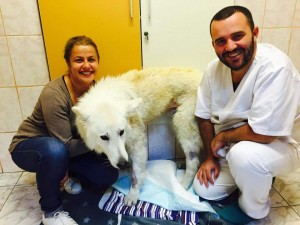 Thank you for sharing! It is Vets on the Balkans !