This year the created 5 years ago by our team new orthopedic technique for cases with radial nerve palsy in cats (see article http://balkanvets.com/index.php/2019/03/09/main-topic-a-new-approach-to-radial-nerve-palsy-in-cats-clinical-case-series-report/) met its biggest possibe challenge and led the case to unexpected 100 % success:

Cat, M, approx 3 years old, Otelo.  The cat has survived after severe trauma which forced colleagues to amputate one front limb and to try saving the other one using standard surgical procedure.  Weeks later the cat came to us for euthanasia: lethargic, anorhexic, with decubital wounds and with very deep and extremely inflammated and painful exhoriation at the chest area due to body dragging on the floors. The not amputated leg wasn’t functional. It was swallowed, with severe purulent inflammation and permanent fistula, with evaluating maluinon (high degree rotation and mild varus) and with radial nerve paralysis, the antebrachial bones showed all radiographic signes of osteomyelitis.  The patient showed all clinical and paraclinical signs of evaluating sepsis. Additionally Otelo had also severe lungs problem. We took the risk to prepare the cat for the DH arthrodesis surgery and to test our technique in these extremest possible conditions. 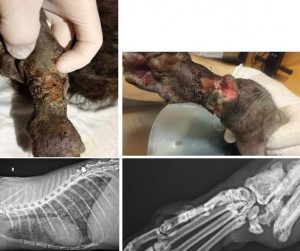 We used the technique on its standard way, we just decreased the rerotation angle from 90-95 degrees to 80-82 degrees, because cats with only one front limb move the existing one to the median body line which leads to natural 10-12 degrees carpal rerotation. 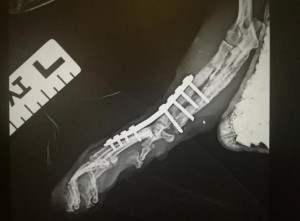 Pre- and intra-operatively we took material for bacterial identification and antibiogram. Of course we counted as usual on VetDiaLab with their unique system for automathic identification even to subtype and for authomatic machine antibiograms. The VetDiaLab fantastic work was the key for complete solving of the chronic multi-infection.

Thanks to the precise lab results, the reliable technique and the amazing post-op care of our team (even including adoption of the patient by “fallen in love” with him team member) Otelo overcame the victim pose, the decubital wounds, the chest deep exhoriation and uses its leg with full geometrical functionality. The deep antebrachial bone infection was 100 % overcome only after removing one of the screws which kept infection – after this manipulation the operative suture finally healed 100 % and we removed the collar on Christmas!

by the Orthopedic department of “Dobro hrumvane!”veterinary clinics,

The radial nerve palsy is a pathology that is rarely seen in dogs, in comparison to cats, where it is more commonly seen, especially in young stray cats. The most commonly observed clinical picture in such patients includes paralysis of the antebrachial portion of the limb, the carpus, the manus and fingers. According to our personal observations, in about 25% of these patients the elbow’s neuro-muscular apparatus is also involved, in a different degree.

The patients demonstrate an external rotation of the antebrachial area in relation to the portion of the limb above the elbow.

The carpus and manus possess an additional and permanent external rotation in relation to the antebrachium, which causes the patients to use the rostral portion of the their carpus for stepping and weight bearing, which in turn inducts the formation of a chronical traumatic inflammatory proliferative granuloma in this area. For about a 25-45 days period, an impossible to overcome carpal hyperfelexion develops, to the point where the joint can no longer be returned to its physiological position, due to the shortening of the flexor muscle-tendon apparatus (see video 1 with cat Sonia 39 days after the trauma at https://youtu.be/SZoXfp8tMJ0 ).

A few therapeutic approaches are being advised for this pathologic condition worldwide: total limb amputation; stem cell therapy (with still controversial results); standard pancarpal arthrodesis (note that very often it is very difficult to execute procedure in the state of this disease and is almost always accompanied by a nonsatisfactory limb function end result).

None of the upper mentioned approaches for treatment of radial nerve palsy in cats, while trying to avoid limb amputation, was producing satisfying results in the patients with this problem, operated by our team. This is the reason we decided to test and implement a new “Dobro hrumvane modified pancarpal arthrodesis” procedure for the operative treatment of feline radial nerve palsy.

Up to this moment, this modified by our team procedure has been done in 111 patients. In the first 11 patients we tried different but very similar to each other versions of the modification, and after patient 12 up to patient 111 (meaning exactly 100 patients) we were performing always one same version of the technique.

In 87 of these patients a follow-up postoperative monitoring for over one year has been performed (in 9 of them an approximately 5 year follow up was achieved, in 33 patients the follow up period was approximately 4 years etc.), in 11 patients the follow up period was between 4 months and one year and in 2 patients the follow up period was less than 4 months. In four of the operated patients, pre- or postoperative clinically relevant paralysis of the elbow region was also observed. As was mentioned earlier, 25% of feline radial nerve palsy patients demonstrate this (according to our observations in 23% of the patients it is already observed in the preoperative period and in other 2%, it develops a few weeks after the surgical intervention, with the reasons for that still being unclear). It should be noted that the majority of owners of patients with elbow area involvement preferred amputation over the experimental procedure.

The standard pancarpal arthrodesis general guidelines are being followed, but with the following modifications: